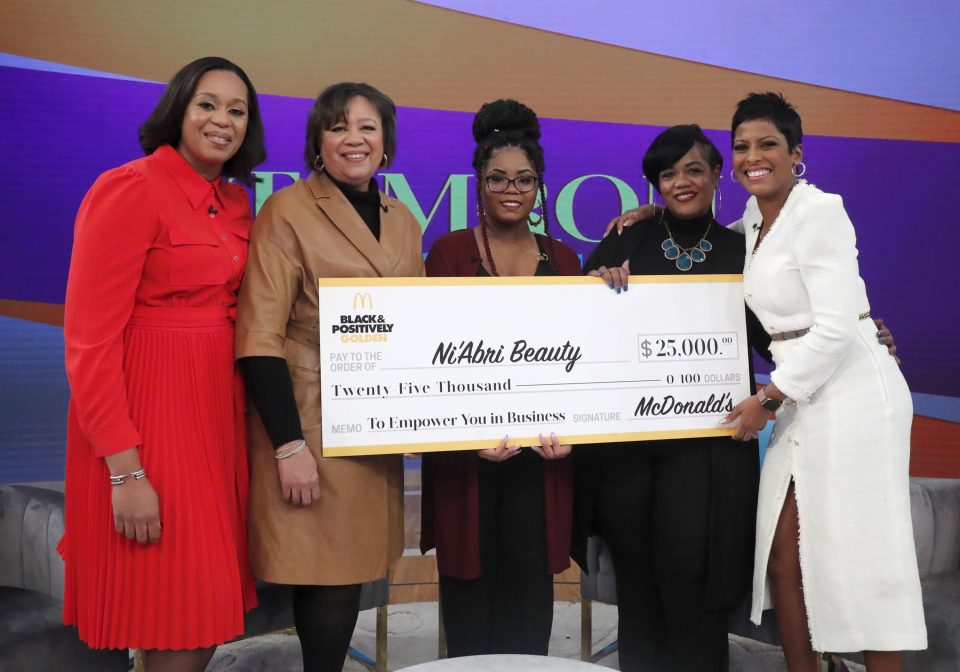 McDonald’s, through its Black & Positively Golden movement, surprised an unsuspecting teen with $25,000 to grow her budding business.

On Wednesday, Feb. 26, 2020, Nia  Nia Phillips-Harper, a 17-year-old Houston native, and her mother Dedra, an author and professor, were guests on a segment of the “Tamron Hall Show” titled “CEO at Sweet 16.”

Last year, in lieu of buying an extravagant material gift, Dedra Phillips formed Ni’Abri Beauty and turned over the reigns to her daughter Nia in honor of her 16th birthday. The Phillips family was invited on he daytime talk show to discuss generational wealth-building with Hall and mother-daughter McDonald’s owner-operators Marissa Fisher and Marla Thrower.

The conversation focused on the importance of engaging children in the business and investing in the next generation. As the segment ended, Hall revealed that her friends from McDonald’s were surprising Nia with a $25,000 check on behalf of its “Black & Positively Golden” campaign to help her continue growing her business. A final surprise came when Hall revealed to the audience that everyone would receive a free product from Ni’Abri Beauty.

McDonald’s continues to support entrepreneurs and encourage building generational wealth. In fact, the brand is inspiring aspiring businesswomen nationwide through its partnership with the YWCA Women’s Empowerment 360° Program, which provides a free six-week business course to help close the entrepreneurship knowledge gap for women of color.

These efforts are an extension of McDonald’s “Black & Positively Golden” campaign, which is designed to uplift communities and shine a light on Black excellence through empowerment, education and entrepreneurship.