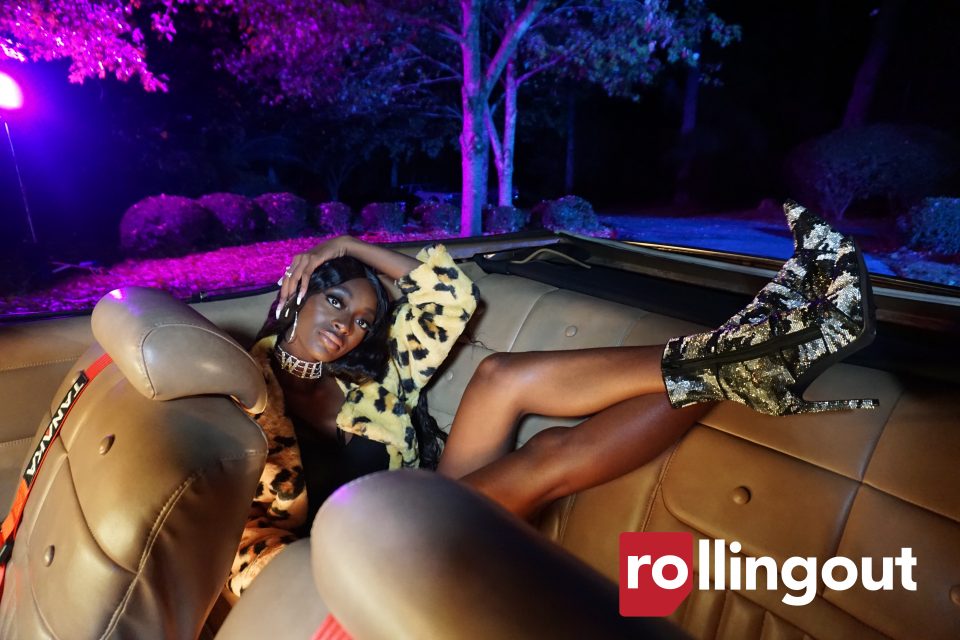 Amazingly, Kayla Nicole has provided inspiring content via social media since the tender age of 13. Whether in the bathroom instructing like-minded peers on how to make a ponytail or looking up and down at an imaginary image on the couch, she’s made life fun and invited her two million-plus fans and followers to enjoy the ride with her.

She isn’t hard to like either. Born with a charisma that oozes from her chocolate skin, she has a palpable understanding of how to use what her mama gave her. Already.

A few hours from her stomping grounds of Sylacauga, Alabama, Nicole is priming herself for a video shoot at a mansion tucked in the Atlanta suburbs. Known for her ability to create content where she stars, directs and improvises, her nervous energy finds her in between rooms, in and out of the dressing room, and up and down the stairs.

The set for her new video, “Late Nights,” featuring YK Osiris, is intact, and while she takes a break from the action, Zone 4 producer Polow da Don takes a moment to test Osiris’ skills on the basketball court. Shortly thereafter, he explains why he chose the 21-year-old Jacksonville, Florida, native to join Nicole on the track and video.

“[I wanted to] take it to the next level,” he says with a disciplined certainty. “I put YK on the record just to enhance what they already have.”

The gravity of the moment is clearly overwhelming Kayla’s mother, Nicole Sanders, who wipes tears from her proud eyes. She’s watched Kayla grow into an internet phenomenon who’s now being courted by some of the biggest names in the music industry. It might not be “Throwback Thursday,” but the flashback is real.

“When she was 9, she did a cover for ‘Frozen’ and was able to hit the high notes,” Sanders recalls, “[but] about three years ago, I really, really noticed it.”

Once she settles back in, Nicole’s personality naturally consumes the room. It’s an unteachable trait that helped chart this path, one the set director, Nia Hill, clearly respects.

“She’s a visionary,” Hill explains. “Like, I think she’s dope in her own right in so many different ways. So it was that part of the reason that I wanted to do [this] particular project.”

As she took an extended break from the action, the radiant social comedian-turned-music artist sat down with rolling out to discuss the present and her boundless future.