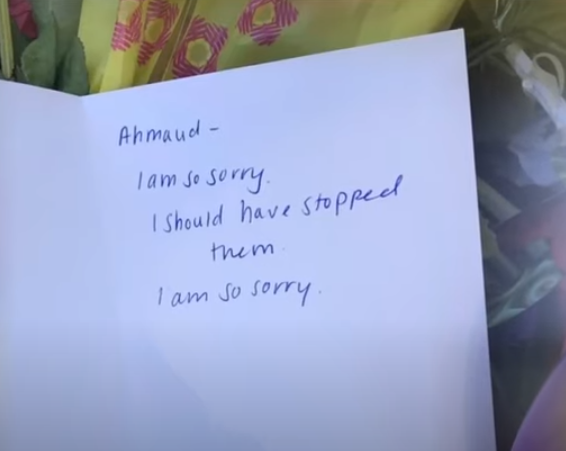 Among the battery of flowers and memorial items at the Georgia site where Ahmaud Arbery was ambushed and fatally shot, a mysterious and chilling note was left there.

A memorial has been erected in Arbery’s name at the very spot where he was felled by two White men’s bullets back in February 2020.

No name is signed at the bottom, and no other information or context is provided. It’s also unclear when the card was left there.

According to attorney Lee Merritt, who is representing the family of Arbery, the note was quickly forwarded to the Georgia Bureau of Investigation and District Attorney Joyette Holmes. Merritt believes it is a “critical piece of evidence” because this means that someone witnessed the shooting. That witness also seems to be filled with dread and regret for not doing something to prevent Ahmaud’s brutal, and completely avoidable, killing.

Take a look at Jacksonville, Florida’s television report on the mysterious note: