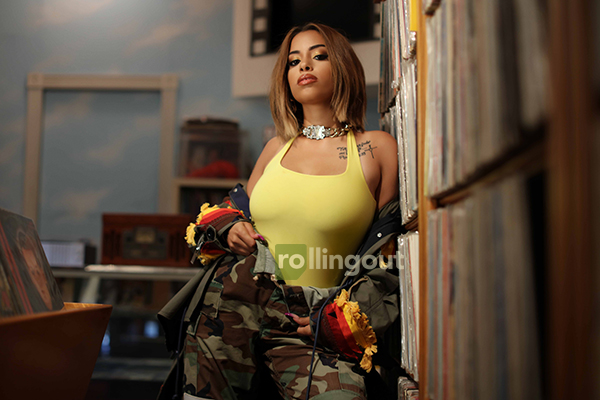 Before the global pandemic known as the novel coronavirus began its descent upon North America, Layton Greene was poised to make 2020 her year. Since sending shockwaves through social media in 2017 with her cover of Kodak Black’s “Roll In Peace” (produced by G-Styles), she literally became an overnight sensation. One upload from her bedroom floor and hundreds of thousands of followers later, she caught the attention of Quality Control bosses Kevin “Coach K” Lee and Pierre “Pee” Thomas, who ultimately welcomed her as the label’s undisputed princess of R&B.

She was riding high. Her debut EP, Tell Ya Story, did just that, and her breakout single, “Leave Em Alone,” was quickly establishing her as an artist on the rise. She’d just turned 21. Fans were waiting, as were venues, for a nationwide tour and countless other opportunities.

Then, with little to no warning, she was forced into quarantine, just like the rest of the globe.

“I feel like [while in] quarantine I’m missing out on opportunities that were given to me,” she says from her home in suburban Suwanee, Georgia, about 30 miles north of Atlanta. “I felt like this was the year for me, and it’s just like I feel like [I’m] being held back right now, being that the virus is going on.

“I don’t know, I’m just impatient. They say your buzz only stays around for so long. And, for me, I popped off in 2017. I’m ready to drop [new music]. My fans are impatient. [They’re] ready to hear some new stuff, and I’m on a whole different wave right now, and I just feel like I’m being held back right now.”

That said, pivoting has never been a problem for the East St. Louis, Illinois-born, Tennessee-raised songstress. She knows the struggle and has proven to be a master of overcoming it.

Before she could legally drink, Greene moved out of the hotel room she shared with her mother and brother in favor of more stable environs with her stepfather. At 14 years old, she’d engaged in a platonic relationship with a man five years her senior. (She told him she was 17.)

On her 18th birthday, Greene grew tired of the friendly nature of their relationship and decided to run away with him. With lucid thoughts of living out a fairy tale, her vision was quickly filled with clouds as her dream boyfriend informed her he had another baby on the way. Even worse, he decided in that moment — while she was working two jobs per his request — that he wanted to be a father to his children.

“Why couldn’t you tell me?” Greene asks incredulously, remembering the moment her life came to a screeching halt. “He allows me to leave my daddy’s place [and] then come and live with him. So, he lets me basically abandon my whole family and then tells me the next day. … My family [is] not messing with me, so I’m stuck.”