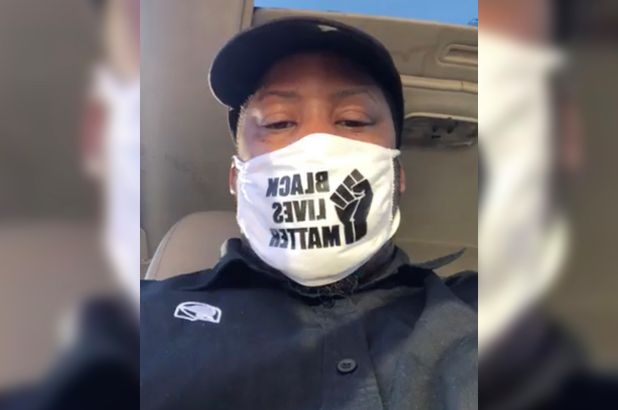 Taco Bell faced severe backlash after a Black man was fired for choosing to support Black Lives Matter.  Denzel Skinner worked at a Youngstown, Ohio Taco Bell, and decided to protest by wearing a face mask with the Black Lives Matter logo, according to WKYC.

However, when he arrived at work on June 8, his manager, who has yet to be identified, forced him to take off the mask or go home. Skinner filmed the interaction on his phone and the clip went viral this past week.

“You can’t bring politics into the building,” the woman told Skinner as he continued to wear the mask while in his car. “OK. Well, then there’s nothing I can do for you. I’m just doing my job. You don’t get it, it’s a company thing.”

The woman then attempted to turn the tables by asking if Skinner would react differently if someone wore clothing that embraced another race.

“Would you like somebody to wear something that said something about white people on it?” she asks.

Skinner responded by saying, “If that’s what they stand for, yes.”

The video ended with Skinner saying that he would get a lawyer and speaking to the camera, “I got fired over a mask, I can’t make this up….Keep standing up for what you all think is right.”

Once the clip went viral, the hashtag #boycotttacobell also became a trending topic.

Taco Bell responded on June 19, revealing that the manager who fired Skinner made the wrong decision.

“We are deeply upset by the incident that took place in Youngstown, OH. Denzel Skinner should never have been put in this position. We believe the Black Lives Matter movement is a human rights issue and not a political one. We do not tolerate racism or violence against the Black community and we demand inclusivity. We know we still have a long way to go and we will make serious, tangible changes. We have been in conversations with Denzel and our franchises to make sure our actions represent our words. We will hold ourselves accountable,” the company said in an issued statement.

Following the death of George Floyd, corporations across the nation have spoken out against racial disparities. But it will likely take more than a few tweets and charitable efforts to change the culture of some corporate entities.