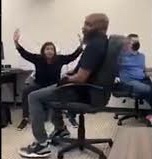 A woman went on a racist rant after she reportedly was fired by her Black boss.

The incident occurred at Gibson Arnold & Associates, according to footage obtained by TMZ.

The woman, whose name has yet to be released, was a temporary worker at the Houston-based company, which serves as a staffing agency for the legal industry.

She continued, mocking rap music. “Let’s make some raps for the n—-as,” she said. “I want to hear you rap motherf—er. You’re a fake a– n—a.”

The woman then began taunting her co-workers’ physical appearances. After her tirade, the woman reportedly was removed from the office building by staff members.

It has yet to be revealed if the woman was arrested, but representatives from the company issued a statement saying they were “horrified” by her actions. The company also described her ex-boss as “one of our valued employees and a leader in our Houston office who was firing her.”

The incident serves as another example of the racial conflicts that have been captured by cellphone video cameras.

View footage of the racist rant after the jump. (Warning: NSFW)