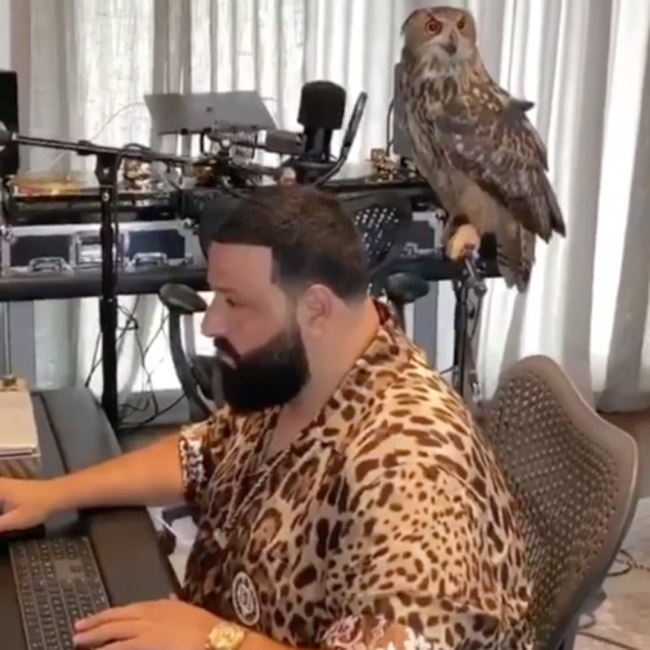 DJ Khaled has teased he’s working on a huge pop tune with longtime collaborator Drake.
While another collaboration between the pair — which previously teamed up on tracks such as “I’m On One,” “For Free” and “Fed Up” — had already been teased by the former rapper, he has now confirmed he’s been sent the “One Dance” hitmaker’s vocals and is busy chopping together the song.

Underneath a clip of him hard at work in his home studio with his pet owl by his side, Khaled teased: “VOCLAS BEEN IN.

The “Wild Thoughts” hitmaker had said: “Drake is definitely on DJ Khaled’s single.

“Drake, he’s always supported me. Think about the records we’ve made.”

Earlier this year, Khaled posted a snap of his baby son to announce he’s in “album mode.”

The “No Brainer” hitmaker took to Instagram to share an adorable picture of Aalam, now 5 months, and confirmed that work is underway on his follow-up to 2019’s Father of Asahd, which was named after his first-born son, who is now 3 — whom he has with wife Nicole Tuck.

“Executive produced by ASAHD AND AALAM

“And trust me we got one ready and loaded !

“Be patient Be safe Be smart Be blessed !

The upcoming record — which will likely be dedicated to his sons, as he listed them as “executive producers” — is set to follow his Bad Boys For Life soundtrack.

The Grammy-winner also made a cameo in the flick.


Posted in Music and tagged dj khaled, Drake, Father of Asahd, i'm on one, Instagram, One Dance, Wild Thoughts