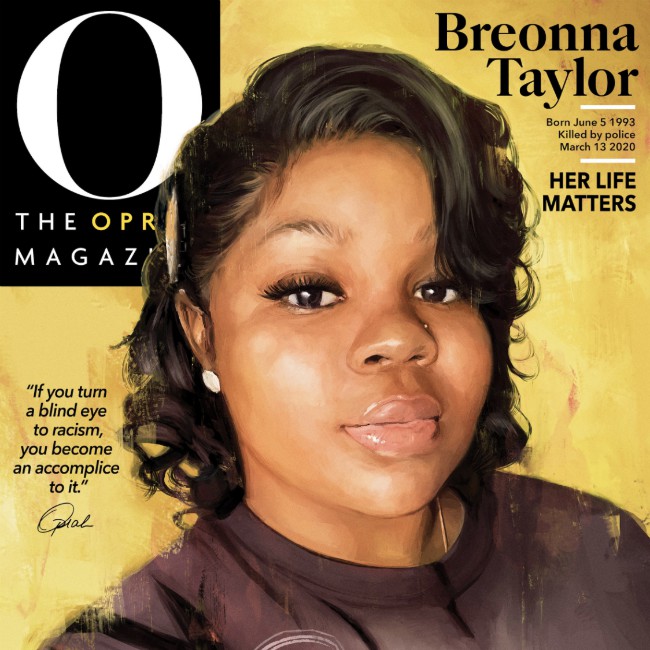 Oprah Winfrey has stepped back from the cover of her monthly magazine to instead raise awareness about police brutality victim Breonna Taylor.

The 66-year-old media mogul has graced the cover of every single issue of O: The Oprah Magazine since its inception in 2000, but the September issue will make history as the first edition to not feature Oprah on the cover, with the issue instead dedicated to Taylor.

Taylor — who was 26 when she died — features on the cover in the form of an intricate drawing and comes after she was fatally shot by three Louisville Metro Police Department officers in March.

Sharing a picture of the cover on social media, Oprah also posted a moving tribute to the emergency medical technician.

She wrote: “Breonna Taylor. She was just like me. She was just like you. And like everyone who dies unexpectedly, she had plans. Plans for a future filled with responsibility and work and friends and laughter. I think about Breonna Taylor often. Imagine if three unidentified men burst into your home while you were sleeping. And your partner fired a gun to protect you. And then mayhem.

“What I know for sure: We can’t be silent. We have to use whatever megaphone we have to cry for justice. And that is why Breonna Taylor is on the cover of O, the Oprah Magazine. The September issue honors her life and the life of every other Black woman whose life as been taken too soon.

“Head to OprahMag.com for more – and thank you to @alexis_art, a 24-year-old digital artist, who captured the essence of Breonna.”