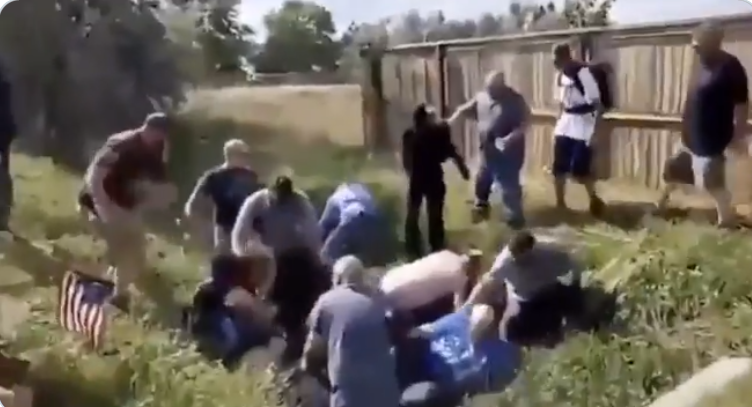 A pro-police group of protesters beat down rival Black Lives Matter demonstrators in central Colorado in a chaotic scene captured on video.

The group called Back the Blue was holding a defiant rally in Fort Collins, Colorado, about an hour’s drive north of Denver, when a counter-demonstration supporting the Black Lives Matter movement began.

The Back the Blue group began menacingly walking back the BLM supporters before beginning to administer a beating on the BLM, which can be viewed below.

Back the Blue rally goers push out BLM counter-protesters and then attacked them. Fort Collins, CO. pic.twitter.com/FbyWRpBUJ5

Interestingly enough, TMZ reports that initially only Black Lives Matter protesters were arrested in the melee in which they actually were the victims or were defending themselves.

But the Fort Collins Police Services counters that report, saying people were arrested on both sides of the demonstration on charges ranging from criminal tampering and resisting arrest to disorderly conduct and possession of an illegal weapon.

The Fort Collins police department issued a statement on the matter, according to TMZ. It read:

“We respect everyone’s right to peacefully assemble. Our officers have consistently supported these rights in recent months as people have gathered to make their voices heard. For the safety of our community, acts of violence and other unlawful behavior have not and will not be tolerated from anyone.

“Truly supporting a cause means representing its values. Committing crimes in our community is not a way to support police. We stand for safety, period. We want all of our community members to feel safe here in Fort Collins and we reject any form of hate.”