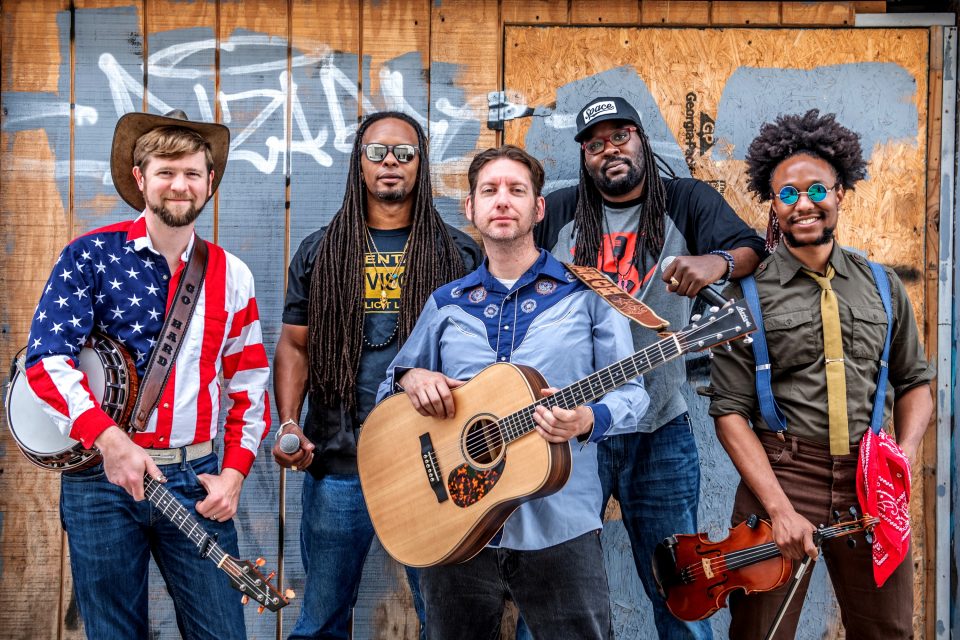 Gangstagrass hangs out in Fountain Square before the group’s show at the HiFi on May 15, 2019. (Photo credit: Melodie Yvonne for Gangstagrass)

Let’s be honest. Hip-hop and bluegrass are the gravitational centers for two radically different musical universes whose faithful followers did not often intermingle with the other.

But that has changed. Gangstagrass is a critically-acclaimed band that has deftly intertwined the two iconic music forms that seemed, on the surface, diametrically opposed. The multi-member group eventually created a sound that is dynamic, enthralling and often edifying.

You can get a sample of this sound by listening to their Emmy-nominated song “Long Hard Times to Come,” which was the theme song for the FX show “Justified” in 2010. Or, better yet, you can enjoy an entire feast with the group’s fifth studio album, No Time for Enemies, which just dropped in August 2020.

Gangstagrass is the mastermind of founder Rench who lives in the Brooklyn borough of New York, grew up in California, but whose roots emanate from the Deep South. Both rap and bluegrass were a part of his cultural menu when he was in single digits.

“My dad’s from Oklahoma. I grew up with a lot of country music playing on the stereo. But I was growing up in the 80s when hip hop exploded everywhere,” Rench recalls. “It wasn’t just in New York and LA anymore. You know, Beat Street (a 1984 rap-based movie) came out. And for me, third grade was all about putting your cardboard down during recess to do your backspins with your parachute pants. And the break-dancing movies came out and that was what all my friends were doing.”

Gangstagrass is comprised of musicians who are Black and White, male and female, rappers and singers, banjo players and keyboardists and others who come from all walks of life. This fertile foundation enabled the band to organically produce an eclectic sound that has captivated audiences nationwide.

“Well, the great thing is that we can come from different starting points, so you get really different fields,” Rench said. “Sometimes I’ll bring the Bluegrass guys together, and they’ll kind of do a jam. And then I can start making a beat around [and] the MCs can play around with that. And then other times it’ll be something like a beat, or one of the rhymes that I’ve heard the MCs do and we’ll start with that we’ll create the beat. And then we’ll have the Bluegrass boys come up with a link to go with that. And so, depending on which one you start with, you kind of end up with more hip-hop production on top of a blue bass song with the hip-hop added on top.”

The result is a rebellious sound that been hailed by the likes of Rolling Stone, Vice, Forbes and others. More importantly, it is music that you can move and dance to while seeking to bridge the gaps between divided demographics.