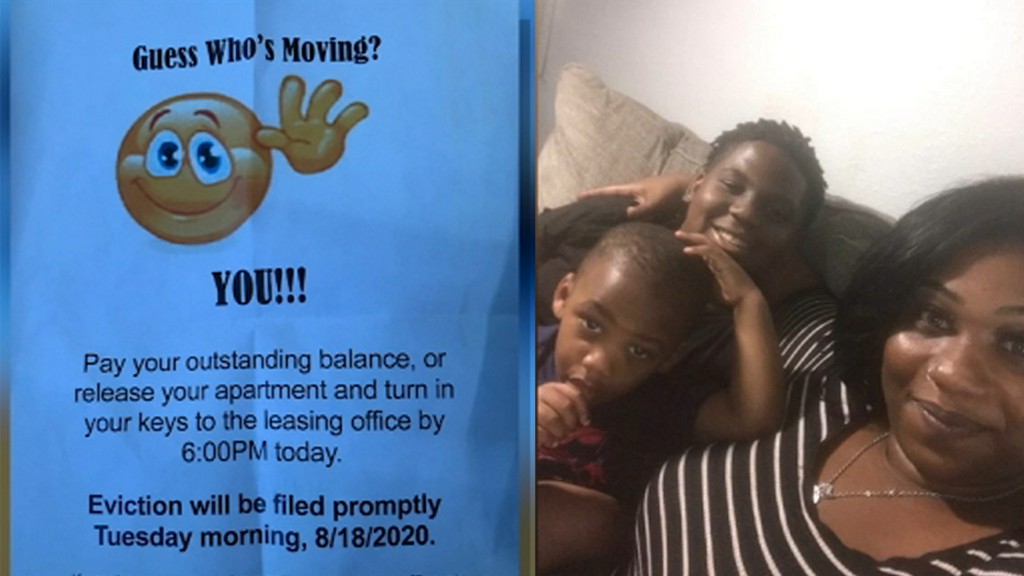 A Houston woman was met with the harsh reality of being evicted on Monday, Aug. 17, when she discovered a notice on her door that afternoon.

The message, “Guess who’s moving? You!!” seemed to taunt Sonja Lee, a mother of two, with its callous words, smiling emoji and waving hand. The notice continues: “Pay your outstanding balance, or release your apartment and turn in your keys to the leasing office by 6:00 p.m. today. Eviction will be filed promptly Tuesday morning, 8/18/2020.”

Lee responded to the notice via Houston’s ABC13: “So y’all think it’s funny to antagonize the person that’s going through financial hardship with putting an emoji stating, ‘Guess who’s moving today?’ There was nothing funny about that.”

Like many people, Lee has suffered to make ends meet during the current global pandemic. She lost her job at Jack In the box in March. After applying for unemployment, she was denied, even after five appeals.

“This notice doesn’t have any power (and) will not hold up in court,” Jon-Ross Trevino with Lone Star Legal Aid told ABC13. “Just because this notice is on your door, doesn’t mean the landlord is correct in what they’ve done.”

Trevino explained that by law, any notice to vacate must be placed in the home and in most scenarios, be given to the tenant within three days of the eviction filing.

The property management company, Karya Property Management, has stated that Lee is not under eviction status and no charges have been filed against her.

Lee has since created a crowdfunding page on GoFundMe that has amassed over $30k, which more than exceeds her initial goal of $3890.