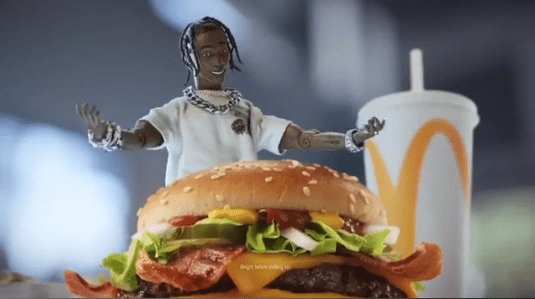 Travis Scott showed up to a Downey, Ca. McDonald’s location in what appeared to be a planned appearance, given several barricades and a throng of people in the restaurant’s parking lot.

It wasn’t long before the rapper, who’s also done successful cross-promotions with the creators of the video game FortNite, was running for cover. As he arrived to celebrate his Cactus Jack combo — one that pulls from his record label and alternate handle — Scott requested a Mickey D’s emblazoned shirt so he could… look the part.

Shortly after donning the top, Scott approached the fans, who promptly broke through the barricades, ignoring all social distancing parameters in hopes of getting closer to the rap star.

“Everyone has a favorite McDonald’s meal, no matter who you are,” McDonald’s U.S. Chief Marketing Officer, Morgan Flatley, said in a press release. “This is the first time in nearly 30 years we’ve introduced a superstar’s name to our menu — we’re excited to bring the Travis Scott Meal to a McDonald’s near you starting next week.”

The Cactus Jack combo is a simple variation of the Quarter Pounder with cheese (combo) that incorporates bacon and lettuce. It also comes with medium fries, bbq dipping sauce and a Sprite. Best of all, it’s only $6.

“I couldn’t be more excited to bring the Cactus Jack x McDonald’s collaboration to life,” said Travis Scott. “We are bringing together two iconic worlds. Including a charitable component was key for me, and I can’t wait for people to see what we have in store.”