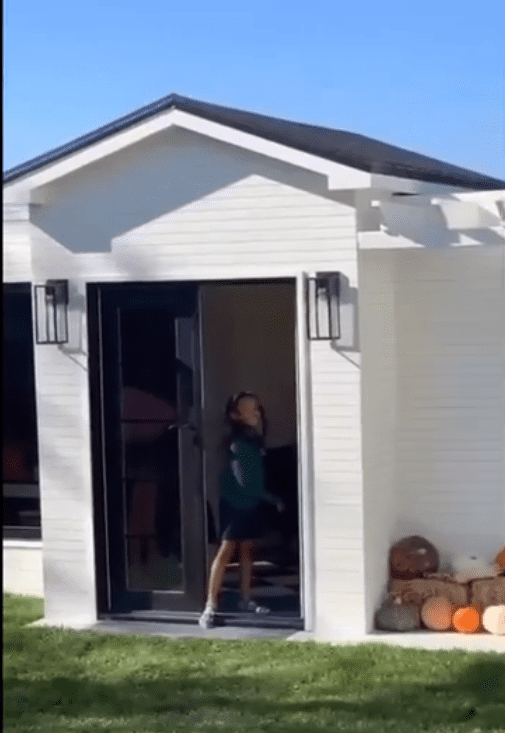 While patriarch LeBron James was striving to win the NBA championship inside “The Bubble” at Walt Disney World, his 5-year-old daughter was living her best life inside her own bubble in posh West Los Angeles.

James bought his daughter Zhuiri a backyard structure that is about as big as a small house.

King James, two months shy of his 36th birthday, is clearly ecstatic to be back home after being sequestered from his family in suburban Orlando, Florida, trying to finish out the longest season in NBA history. LBJ just captured his fourth NBA championship individually and 17th overall for the Los Angeles Lakers franchise as his team vanquished the Miami Heat 4-2 in NBA Finals on Sunday, Oct. 11, 2020.

Now that he’s finally gotten a reprieve from his quarantine confines in central Florida, James is able to show off his daughter’s new playhouse.

“Breakfast with my champion during her school break,” LeBron captioned the Instagram stories for his 73 million followers that was captured later by World Star Hip Hop.

“So this is outside the house,” the NBA star narrated the video as he scanned the backyard of his spacious mansion before panning over to Zhuri standing in front of her playhouse. “And then this little girl has the nerve to have her own house.”

The tiny house has the same black-and-white color scheme as the main estate. Zhuri even quips that it “looks like a real house.”

James and Zhuri also gave fans a quick tour of the inside of her playhouse, which is designed to give her space to do her homework and play with her friends.

Check it out below.

#LeBronJames' daughter got her own house in the backyard! 👀🔥 @kingjames