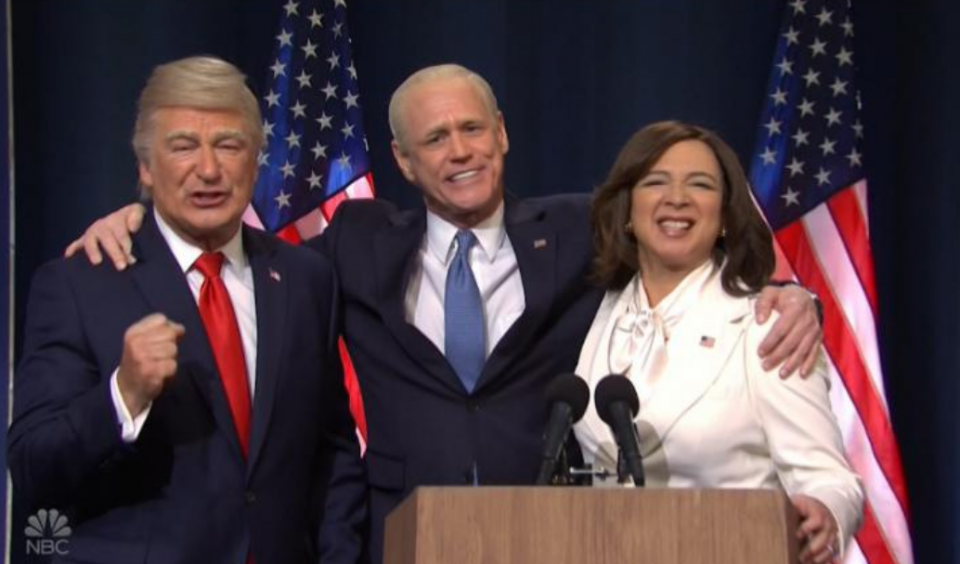 The timing for Joe Biden and Kamala Harris’ victory in the presidential election on Saturday, Nov. 7, 2020, could not have been better for “Saturday Night Live.”

“Thank you very much, America! We did it!” Carrey said. “Can you believe it? I honestly kind of can’t. It’s been so long since something good happened.”

“Which is ironic since I’m not that alive,” Carrey joked.

Carrey’s Biden also said he would be a president to all Americans.

“SNL” also shot to the loser, 45, played by actor Alec Baldwin, for the lame-duck president’s “concession” speech, which turned into a defiant call to fight the election results.

“Thank you for coming to watch my victory speech tonight,” Baldwin’s 45 said. “As anyone who died halfway through Tuesday knows, I was re-elected president of the United States.”

Baldwin’s 45 said the election is being stolen.

“Let’s hear it. Stop the count! Stop the count!,” Baldwin as 45 yelled before an aide told him he was losing. “What’s that? I’m behind. Count all the votes!”

Baldwin then vowed to fight the election results in court.

Check out Baldwin below:

Let's check in on the president's concession speech. pic.twitter.com/3If4UzQeXw

Also, check out the skit uninterrupted: