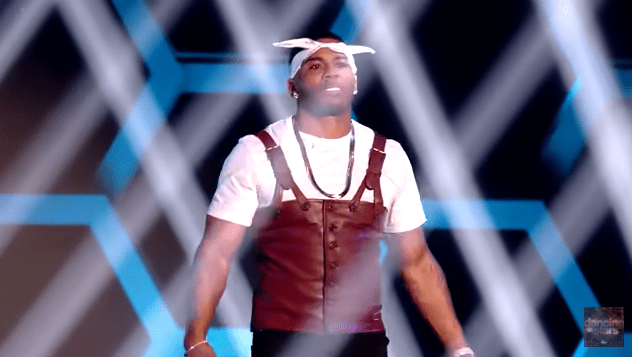 Nelly performs moving tribute to 2pac on “Dancing With The Stars” (Image source: YouTube / Rachel B)

St. Louis rapper and entrepreneur Nelly has been the subject of some lightweight criticism on “Dancing With The Stars,” but who hasn’t? Critics critique right?

The hard conversations haven’t stopped the St. Lunatics frontman from doing his very best on the show and based on his most recent performance, that sticktoitiveness has landed him a spot in the semifinals.

Nelly’s challenge this week was “Icons Night,” which required him to choose a favorite icon and dance accordingly. He chose a jazz rendition of the 2pac’s seminal hit, “California Love” and was all smiles after impressing the judges with a memorable performance.

“Wanna thank errbody who voted for ya boy tonight..!!!” he wrote. “It was A honor getting a chance to pay homage to my favorite icon #2pac ..!!! Thank you for da LUV”

Despite scoring eights across the board, this performance was not Nelly’s most impressive from a scoring standpoint. Nelly’s highest-rated performance came on the heels of his Argentine Tango, in which he used The Weeknd’s “I Can’t Feel My Face” (Oct. 26) to pull off his most talked-about performance. In it, he earned the first three nines (out of 10) in the competition.

But it was last week’s rumba to “Nobody Knows” by the Tony Rich Project that has been called Nelly’s most memorable and meaningful, as that number was dedicated to his late sister, Jackie Donahue, who passed away at age 31, due to complications from her leukemia diagnosis.

“My sister Jackie was very special to me — she was my big sister, so she definitely acted like it,” he said in that episode’s video package. “She was a real tough cookie, such a loving and caring person, [and] she was the caption of the ship up until she was no longer able to be it.

“She would definitely have a chuckle about me dancing. Dancing to one of Jackie’s favorite songs is dope. I miss Jackie an awful lot, I miss Jackie every day.”

Nelly was allowed to put his own twist on “California Love,” which included reciting the lyrics of the immensely popular song.

Peep it out after the jump.