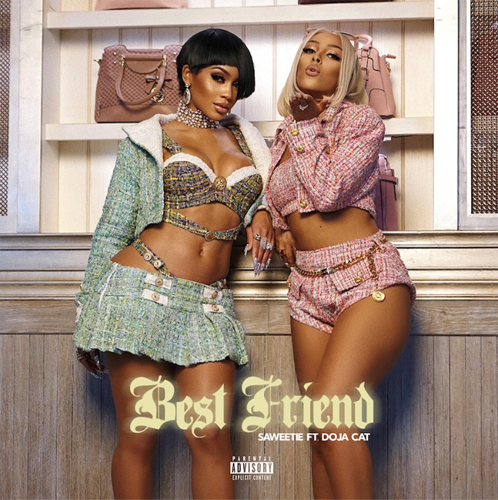 Before dropping her debut album, Saweetie is easily recognized as one of the most impactful artists in the industry with billions of streams and YouTube views, all of which has landed her multi-platinum-selling success.

It only makes sense for one viral artist to hook up with like-minded talent, which is the case of her lead single, “Best Friend,” featuring controversial beauty Doja Cat.

A feat of empowerment carried out with clever rhymes over a slapping beat, Saweetie and Doja Cat accomplish the task at hand, embracing their womanhood and independence in a furiously fun and steamy video. From a luxury whip, where they galavant about the town on their way to the strip club, to more plush confines that might include fabulous mansions or exquisite hotels, the California-bred duo keeps it lit lyrically and visually.

On the catchy hook, Saweetie spits: “That’s my best friend, she a real bad b—- / Drive her own car, she don’t need no Lyft…,” to which Doja Cat replies with her own dose of wit: “If she ride for me, she don’t need a key.”

As hot as the visuals are, with countless body shots that include Saweetie standing on top of Doja’s booty, the daring duo saves the best for last. With their hands locked and having peeled off their matching sweatsuits, they dive off a cliff into the waters of the Pacific Ocean as the video concludes.

“Best Friend” is a fitting precursor to Saweetie’s debut album, which is slated for an early spring release.

View the steamy video after the jump.