Gospel music superstar Erica Campbell gave some pastors and preachers a quick tongue-lashing for their alleged social media behavior regarding attractive women on the web.

In a nutshell, the Grammy-winning singer and reality TV star delivered a sharp admonishment to men of the cloth who click on the photos of beautiful women in bikinis and other attire that show off too much skin: Stop it.

Campbell, who paired up with her younger sister, Tina Campbell, to form the seminal group Mary Mary, took to her Instagram story to explain to her 2.5 million followers what she meant. 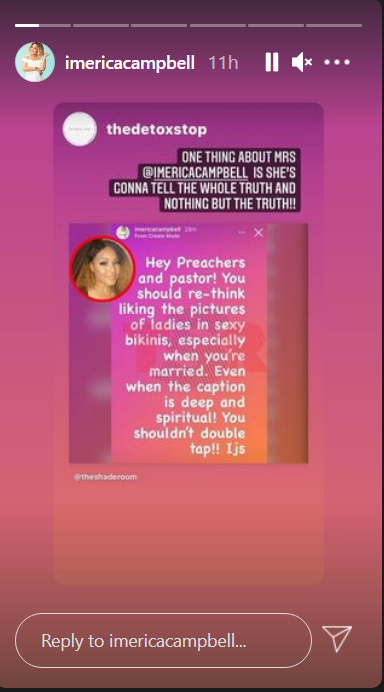 The married mother of three did not get into the specifics of what instigated the posting of this stern warning. Campbell is currently married to Warryn Campbell, the record producer for Mary Mary and other recording artists, whom she married in May 2001. The couple also are the pastor and first lady of the California Worship Center in North Hollywood.

This is not the first time that Campbell has tackled such issues. Back in November 2020, according to The Jasmine Brand, Campbell reposted a message about wayward ministers straying from their marriages yet also counseling their parishioners about the importance of fidelity.

“You can’t sow h– seeds and reap marriage benefits,” the message read. “Your brain and body don’t switch up like that. You gotta prepare your mind for marriage because it’s ministry.”

What do you think about Campbell’s message? Sound off in the comments section.