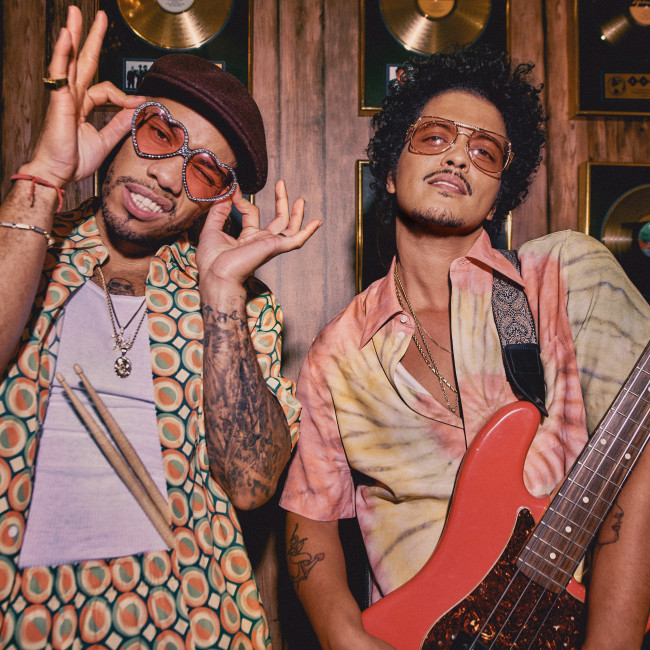 The pair have teamed up to record an album called An Evening With Silk Sonic, and the first tune from the record — which also features “special guest host” Bootsy Collins — is out now with a music video, which sees them dripping in pieces from Mars’ Lacoste x Ricky Regal Collection.

The “Finesse” singer has just teamed up with Lacoste to launch his new lifestyle brand, Ricky Regal.

A press release states: “Inspired by a lust for life and an entrepreneurial Midas touch, the collection bridges Bruno’s enigmatic personality and distinct style with Lacoste’s iconic blend of sport and luxury.”

Teasing the new single and record from his new outfit, Mars tweeted: “We locked in and made an album. The band’s called Silk Sonic. First song drops next Friday 3/5.”

Rapper .Paak tweeted: “WE MADE AN ALBUM!! YALL GET THE FIRST SONG NEXT FRIDAY 3/5!! ROCKET EMOJIS AND ALL THAT!!!”

The pair are no strangers to working together after they toured with each other on the 35-year-old singer’s “24K Magic World Tour” in 2017. There was speculation at the time that the pair had worked on new material with Chic guitarist Nile Rodgers and a member of Disclosure after a video emerged on social media of the quartet at the famous Abbey Road Studios in London. Mars hasn’t dropped an album since 2016’s 24K Magic.

The “That’s What I Like” hitmaker teamed up with Ed Sheeran and Chris Stapleton for single “Blow” in 2019, which appeared on Ed’s No.6 Collaborations Project album, and in the same year he released the song “Please Me” with Cardi B.

Mars’ debut fashion collection is available worldwide now across a global network of 18 exclusive retailers and at selected Lacoste boutiques and Lacoste.com.com from Monday, March 8.

Flip the page to check out the video for “Leave the Door Open.”