Kirk Franklin apologizes for cussing his son out (video)

Kerrion Franklin, the son of gospel star Kirk Franklin, released an explosive phone conversation that he allegedly had with his famous father on Saturday, March 13, 2021, in which the patriarch pummels his son with a string of profanities and threats.

Kerrion Franklin, 33, explained that he has had no relationship with his “Melodies from Heaven” hitmaking father for many years and that their estrangement is so bad, he doesn’t even know where his parents live. Kerrion Franklin said he doesn’t understand the level of hatred his father has towards him. But he made it clear that he doesn’t trust Kirk Franklin enough to ever be alone in his presence.

The son apparently tried to make his supporters and Kirk Franklin fans understand his side of the severed relationship which he believes is irreconcilable.

“This is why I’m done. No father should speak to their children like this. If I have any issues it’s because of this type of treatment that I deal with behind closed doors,” the son said in a caption to a video on Instagram, according to The Grio and Baller Alert.

“Hanging up in my face, no apology, no compassion, no effort,” Kerrion Franklin continued. “Stop telling me to go home to my family. I don’t even know where they live. I don’t think I’ll ever trust my father to be alone around him ever again.” 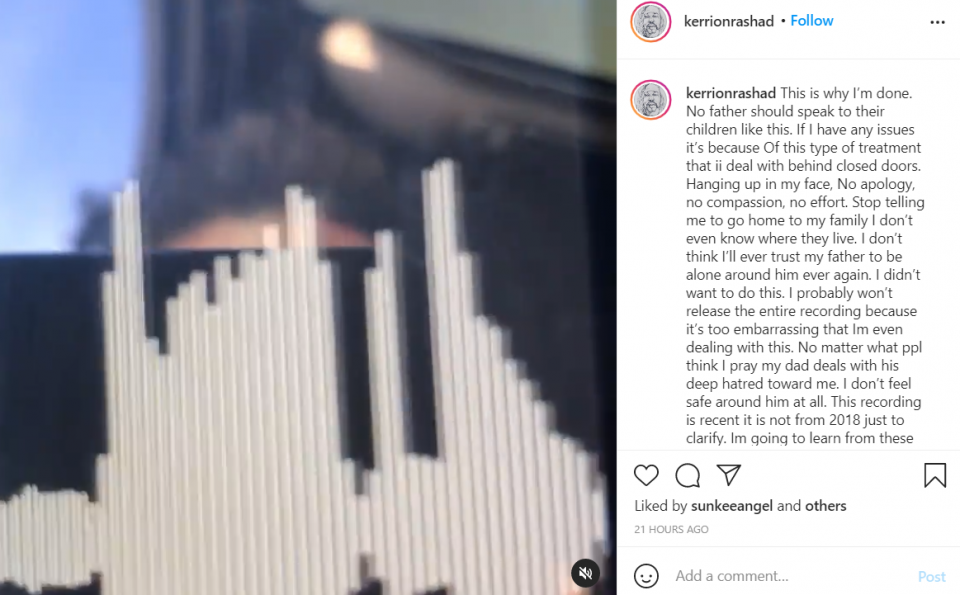 Kirk Franklin, 51, later apologized to his two million Twitter followers late Saturday evening for going on an expletive-filled tirade directed at his son after he believed he was disrespected once again.

Social media was shaken to the core by the recordings and it ignited a great debate among Kirk Franklin’s fanbase.

I don’t know why y’all so surprised about Kirk Franklin. I’ve been cussed out in the name of Jesus before 🤷🏽‍♀️

Kirk Franklin: *cussing his son out

Me: this aint none of my business

No judgment here for Kirk Franklin cause I know these kids will sometimes make you lose your 💩!! pic.twitter.com/o4dKsbcS9u

The way I just HOWLED https://t.co/3gNKTjgzaG

Me listening to #KirkFranklin cuss his son out ..Ya'll should already know church folks are the best cussers and that's on Mary and her little lamb. Period. LoL 😆 pic.twitter.com/IQ3CwVsY3S

Check out the audio recording in full below: