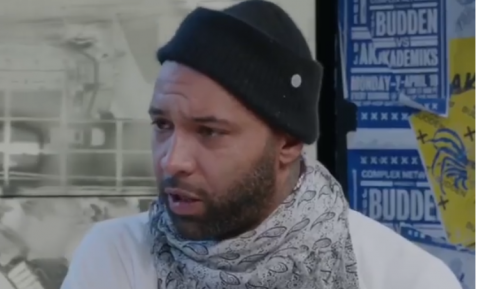 There seems to be tension brewing on “The Joe Budden Podcast” as co-hosts Rory and Mal have been missing since Saturday, March 20, 2021. During Saturday’s episode, Joe admitted there was some friction between the crew and went along with the show with interim co-hosts, Ice and Savon.

“I’ll eliminate some of the suspense. Rory and Mal aren’t here, but this is Rory’s seat — this is not Ice’s seat — and this is Mal’s seat. Whenever they feel like returning to their seats, then they’ll return to their seats, then I can go back to work. And then what will happen is the same thing when your star player comes back to the team,” explained the rapper.

Budden then revealed that his friends are taking time for themselves while they work out their respective grievances. Parks, the fourth member of the team and the show’s recording engineer, also weighed in adding that doing business with friends can be awkward.

“I’ve been doing business with Joe Budden for a very long time. I don’t come to you with business s–t because we have to keep doing s–t … Other people should probably have somebody else to talk to you or one of your professionals,” commented Parks.

Parks also added that Rory and Mal’s strike wasn’t over financial issues, while Budden maintained that it wasn’t a “beef.”

“It’s not a beef. Nobody has communicated a beef. What they have communicated to me is something is wrong. Whether that be in our friendship, how we’re speaking to each other, the respect level. Sometimes in friendship and business, everyone needs to take a step back and go to their respective corners. Sometimes everyone’s perspective and perception on how to go about that and how it should be executed is different,” added the Mood Muzik rapper.

Click on the following page as Joe and Parks explain the drama surrounding “The Joe Budden Podcast” around the 15-minute mark.