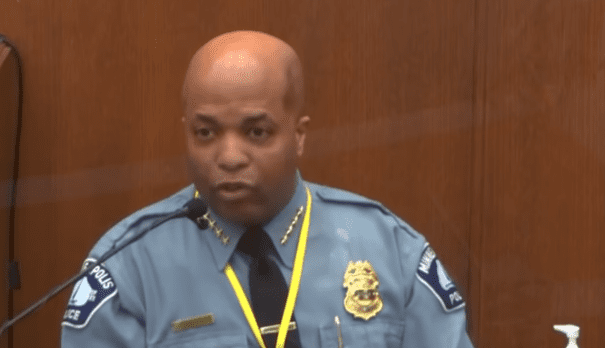 “Clearly, when Mr. Floyd was no longer responsive and even motionless, to continue to apply that level of force to a person — proned-out, handcuffed behind their back — that in no way, shape or form is anything that is by policy, it is not part of our training, and it is certainly not part of our ethics or our values,” Arradondo said in court on Monday, April 5, 2021, according to MSNBC.

Chauvin is facing charges of second- and third-degree murder and second-degree manslaughter.

The testimony given Monday by Arradondo — the first Black police chief in Minneapolis history — is consistent with what he said in June 2020 about Chauvin’s alleged use of deadly force. “This was murder — it wasn’t a lack of training,” Arradondo said at that time, according to NBC News. “The officers knew what was happening — one intentionally caused it, and the others failed to prevent it.”

This also comes after the testimony of an emergency room physician, Dr. Bradford Wankhede Langenfeld, who testified that he believed Floyd most likely had died of asphyxiation rather than an overdose of drugs, The Associated Press reported.

Moreover, the police chief testified that Chauvin did not follow proper training on several occasions with respect to the death of Floyd. He said:

Flip the page to view Arradondo’s testimony in court.