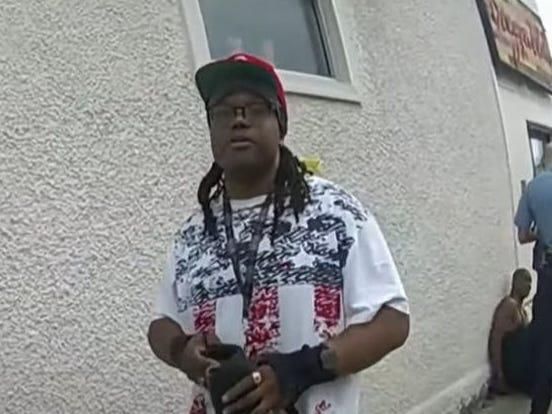 Morries L. Hall on the day he was with George Floyd when he died on Memorial Day 2020. (Image source: Police bodycam, Minneapolis Police Department)

George Floyd’s friend Morries Hall, who was in the car when Floyd was arrested, has invoked his Fifth Amendment right against self-incrimination to avoid testifying in the Derek Chauvin murder trial. However, the judge could make Hall provide at least partial testimony.

Last week, Hall filed a notice that he plans to exercise his Fifth Amendment rights to avoid providing self-incriminating evidence. Hall said he strongly believes he may be subjected to future prosecution because of his testimony, including possible third-degree murder, drug distribution and other charges, the Minneapolis-based Star-Tribune reports.

Case in point: if Chauvin’s attorney is able to convince the jury that Floyd died from the toxic drug combination in his system instead of Chauvin’s knee pressed into his neck, then Hall could possibly be prosecuted for causing Floyd’s death.

Hall’s attorney, Adrienne Cousins, said Hall “has been provided no immunity, no protection for his testimony whatsoever. I cannot envision any topics Mr. Hall would be called to testify on that would be relevant to the case that would not incriminate him.”

The Star-Tribune reports that Chauvin’s attorney, Eric Nelson, had to reveal the lines of questioning he has planned for Hall, which include:

Chauvin’s attorney also would want to grill Hall on other subjects, such as “taking something out of his backpack and throwing it,” giving false names to the responding police, and leaving Minnesota for Texas right after Floyd was killed.

Hennepin County Judge Peter Cahill paused on rendering a decision about whether Hall would be compelled to give at least a partial testimony. Cahill told the prosecution and the defense he wants both sides to present arguments concerning why Hall should or should not testify before he makes a final decision.

Flip the page to listen to the judge mulling over Hall’s decision to invoke the Fifth Amendment.