Floyd Mayweather is all about the money and will be battling YouTuber Logan Paul in June. The undefeated 50-0 fighter recently revealed that he isn’t putting his legacy at stake but that he was building financial wealth during his “retirement.” Money Mayweather spoke with “The Disruptive Entrepreneur” podcast about why he took the fight and why it won’t damage his impeccable record if he loses.

“Because a fight is something that goes on your record forever. This is an exhibition. Remember this, I got a sharp mind. I told y’all I was entertainer, so I can fight a fighter right now and I can guarantee myself $35 million. Or me and Logan Paul can go out and entertain people and bring in nine figures, $100 million. Why not?” the boxing champion explained.

Paul is famous for his YouTube exploits but his ring experience is quite limited. The 26-year-old fought fellow YouTuber KSI previously in 2018 and 2019 and those bouts ended in a draw and a split decision, which Logan lost. The fight is scheduled for June 6 at Hard Rock Stadium in Miami Gardens, Florida. Mayweather Promotions, Showtime, and the fan-experience website Fanmio are all involved in producing the matchup.

The fight will be shown on pay-per view for $50. Fight specifics such as rules, size of gloves, how many rounds it will go, or even the undercard have yet to be revealed. Paul has been extensively training for the fight and has posted his workouts and sparring sessions on his social media platforms. Taking the fight way more serious than Mayweather, Logan is very confident in himself, tweeting, “5 weeks until I beat @floydmayweather #June6.” 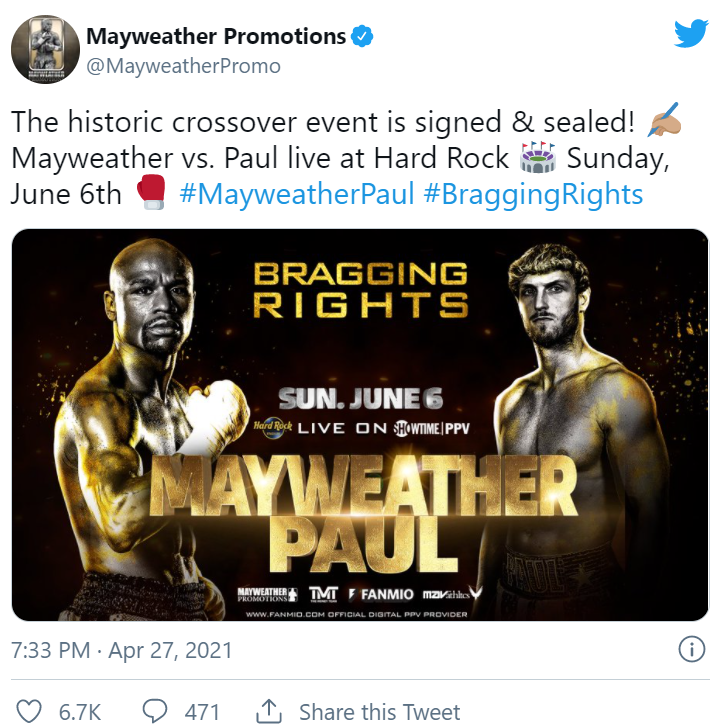 Logan’s brother, Jake Paul, is a fellow YouTuber and Internet personality as well. Jake Paul has three fights under his belt but came out victorious in his battles. Jake Paul defeated boxer Nate Robinson last July and most recently defeated Ben Askren via TKO in a mixed martial arts event in April. Check out Mayweather discussing his upcoming exhibition on the next page.