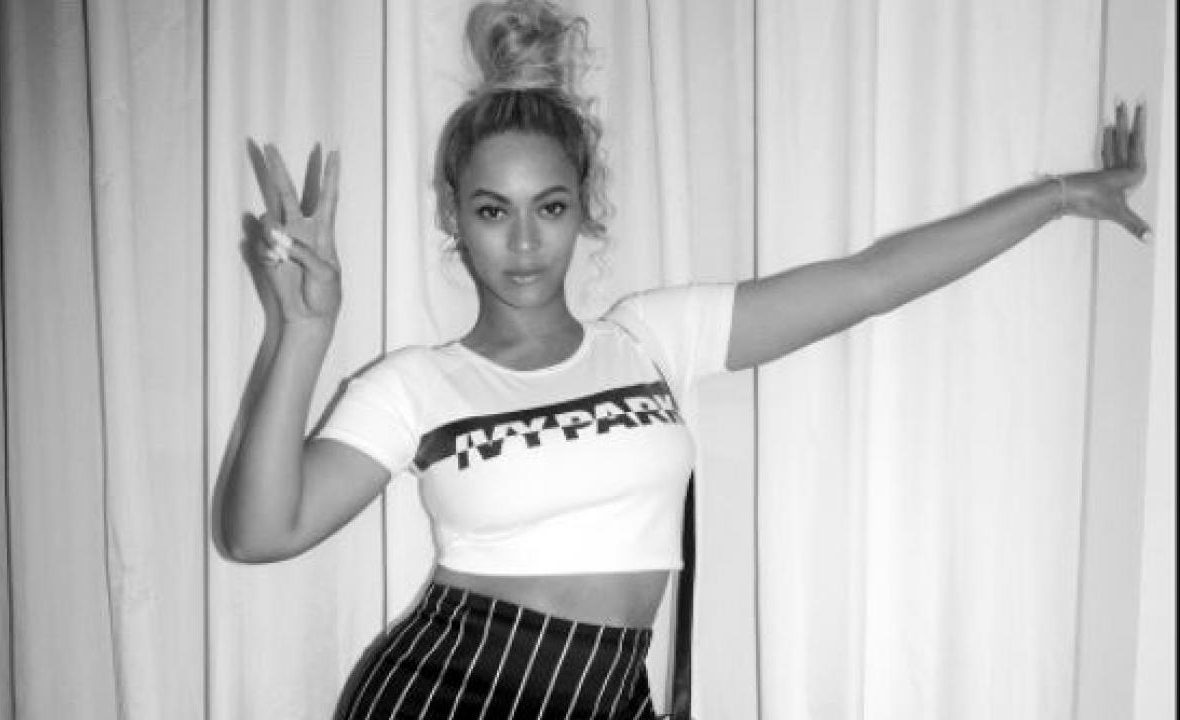 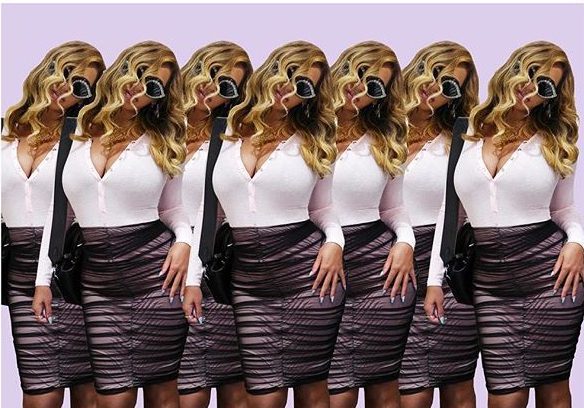 Beyoncé continues to slay all day. On Friday, the mother of three posted a series of fierce new ​photos via Instagram ​showing off her fabulous figure, just four months after giving birth to twins, Rumi and Sir Carter. Dressed in a white, long sleeved bodysuit with a deep-v neckline, which she perfectly paired with a […] 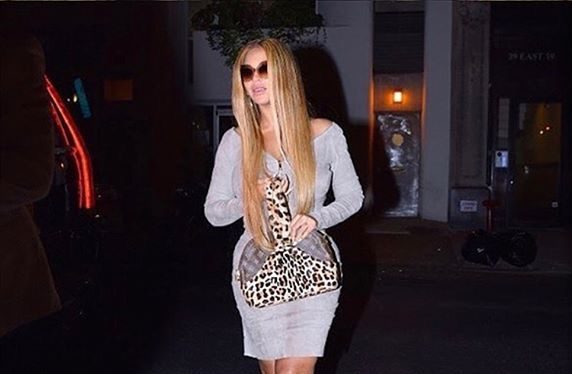 Can’t stop, won’t stop. Beyoncé continues to turn heads, in figure flattering post-baby body ensembles. This week, the superstar singer dared to explore her wild side, dressed in a beige bodycon dress, perfectly accentuating her curves. In true Bey fashion, the 36-year-old punched up the look with edgy accessories, including an animal print bag and […]

Beyoncé slips into something tight, shows off new tattoo 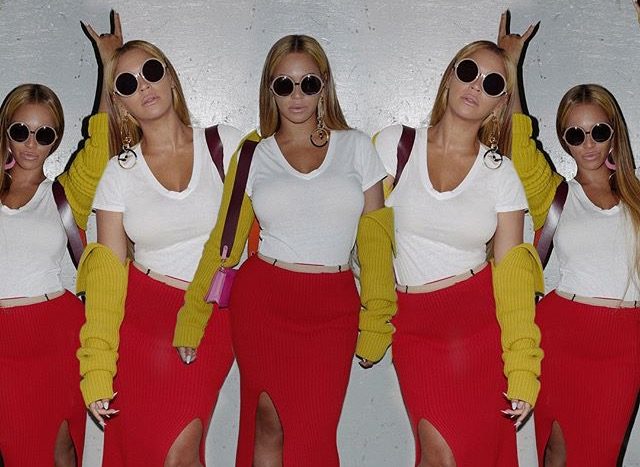 It’s safe to say that Beyoncé is feeling herself. In a new series of Instagram photos, the singer slips into something tight — a red midi skirt featuring a thigh slit, white tee, and chunky yellow sweater sleeves — while flaunting her post-baby body. Her hair, laid down her back, perfectly complements her street style look. […]

Last week, Beyoncé took in a Broadway show — the Tony-winning musical Dear Evan Hansen — wearing a sexy, curve-hugging off-the-shoulder blouse and mini skirt with lace detailing up the side. Now, it appears like Broadway is her new jam, as the mother of three attended yet another show, Aladdin at the New Amsterdam Theatre […] 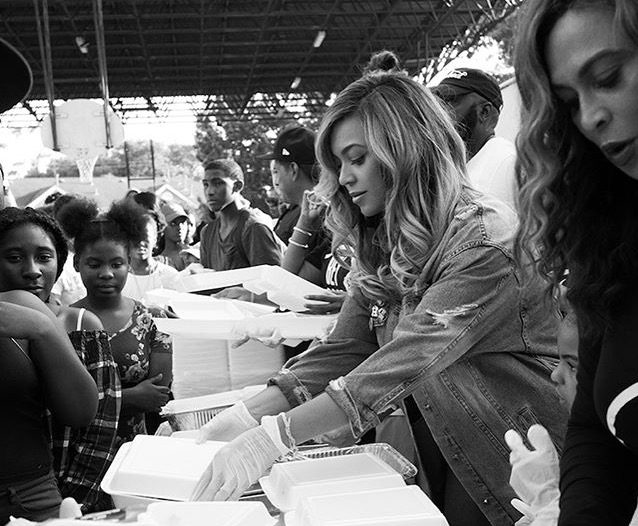 Beyoncé continues to support her hometown. As previously reported, the 36-year-old singer arrived at St. Johns Church in Houston, Texas, on Friday, with her daughter, Blue Ivy, where she aided victims affected by Hurricane Harvey as well as delivered a message of hope to the congregation. “I just wanna say that I’m home,” the “Formation” […] 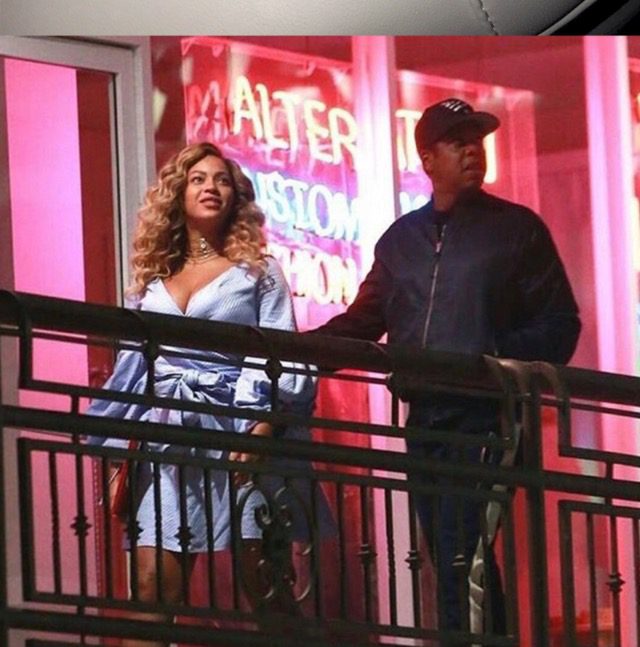 Jay-Z and Beyoncé hit the town recently, and we have the photos to prove it. The “Lemonade” singer looks flawless as ever in new Instagram pics from her latest date night with her rapper hubby in sunny Los Angeles. View this post on Instagram A post shared by Beyoncé (@beyonce) In a video clip shared on […] 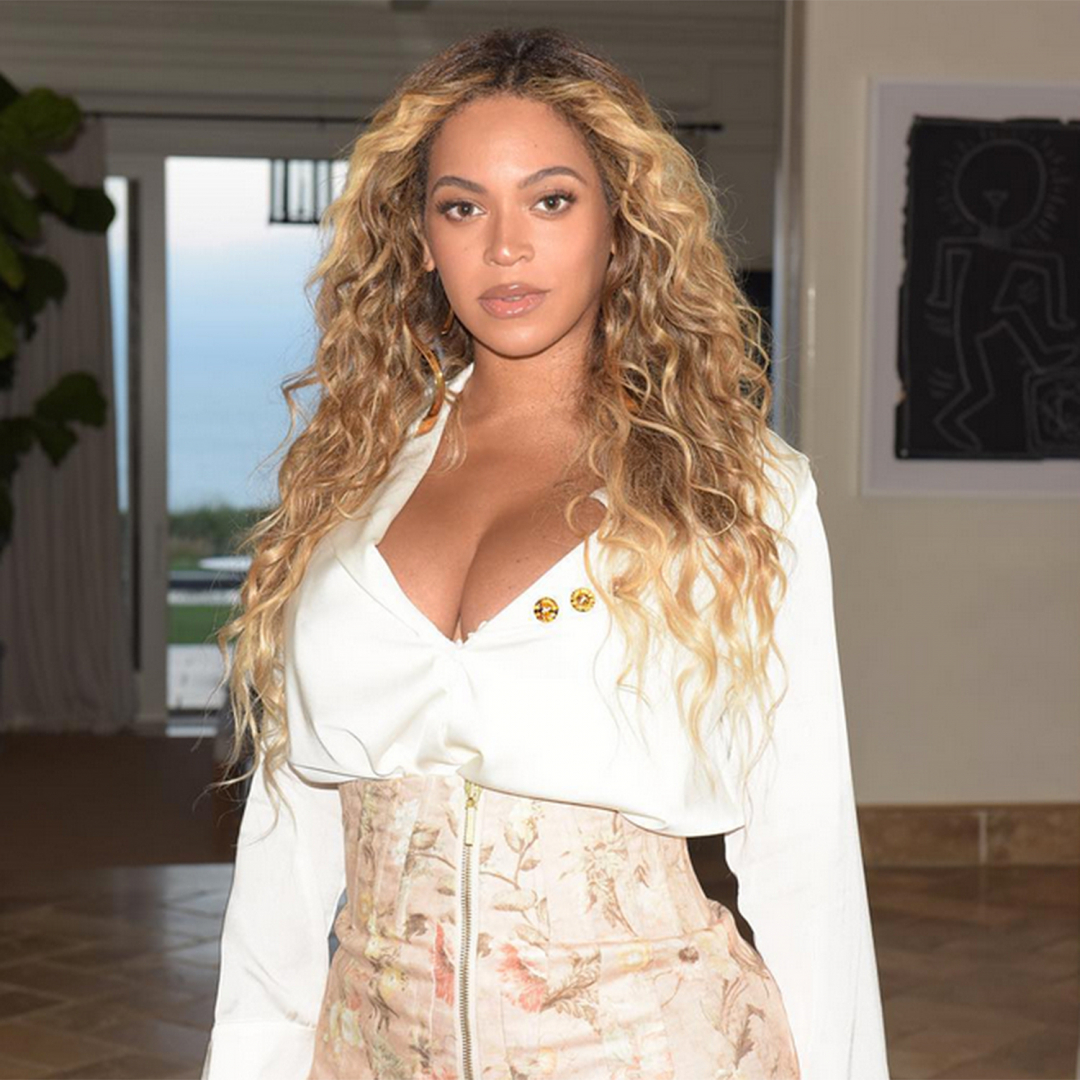 Just one month after giving birth to twins, Rumi and Sir, Beyoncé, 35, stepped out with her husband Jay-Z for an event celebrating Roc Nation artist Vic Mensa in sunny Los Angeles — marking their first public outing since welcoming the new additions. 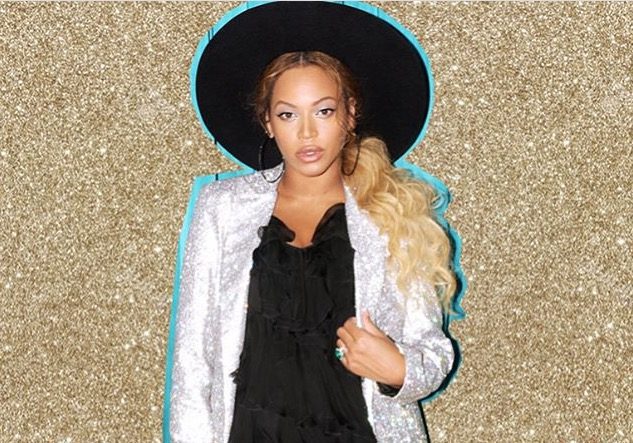 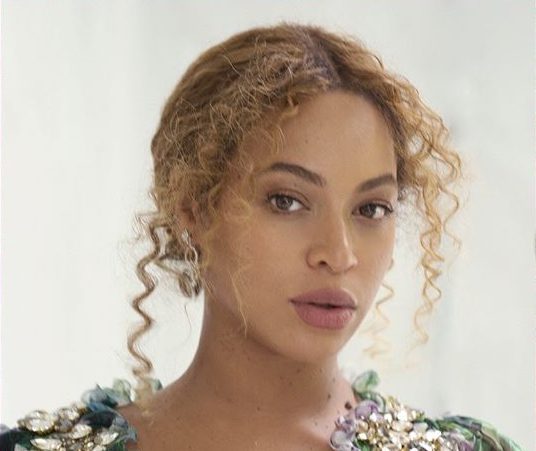 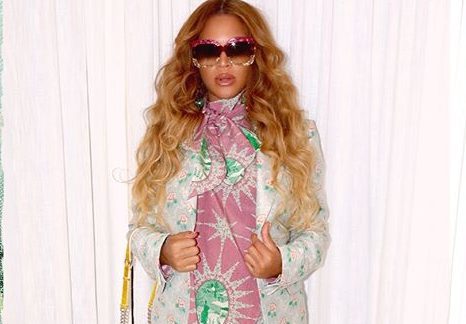 Every pic you missed from Beyoncé’s adorable Easter celebration 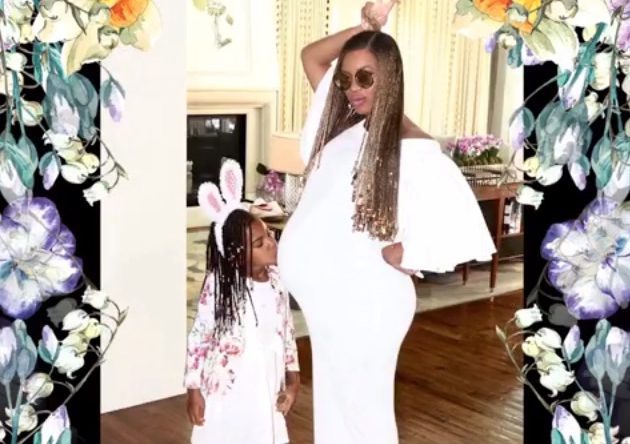 View this post on Instagram A post shared by Beyoncé (@beyonce) Beyoncé, who is expecting twins, and her daughter Blue Ivy, 5, show off their Easter’s best. In case you missed it, early Sunday morning, the singer took to Instagram where she shared a cute clip, highlighting a Knowles family Easter. Set to Bill Withers’ […] 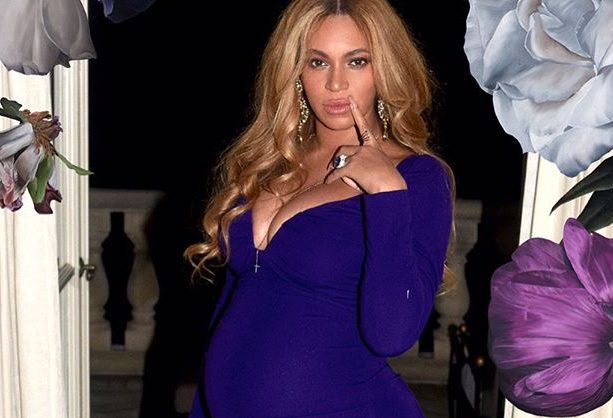 View this post on Instagram A post shared by Beyoncé (@beyonce) Beyoncé goes glam in sexy new pregnancy snaps. On Saturday, April 1, the expectant mother, 35, took to Instagram where she shared a series of photos highlighting her growing baby bump. Dressed in a cobalt blue floor length gown, perfectly accessorized with large dangling […] 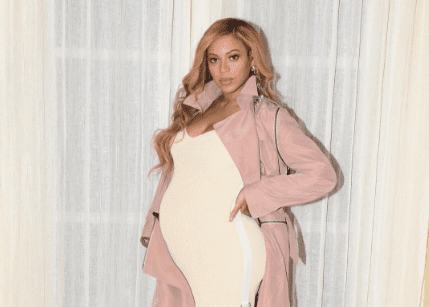 Beyoncé shows off her baby bump in a pretty pink ensemble.

In a new series of photos shared via Instagram, the singer, 35, who is currently pregnant with twins, gave fans an inside look at a recent outing with her daughter, Blue Ivy. 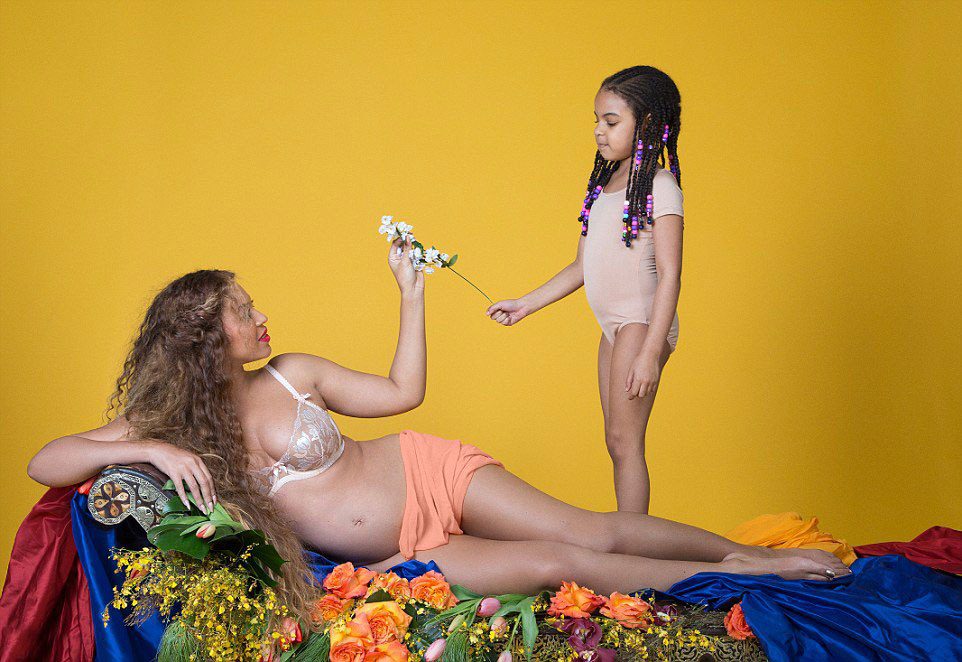 As fans struggle to recover from news of Beyoncé‘s double whammy pregnancy announcement, the 35-year-old took it up a notch, delivering an intimate photo album, featuring, baby bumps and luscious lady lumps. Titled “I Have Three Hearts,” referring to her own heart along with that of her unborn twins, the “Formation” singer looks every bit […] 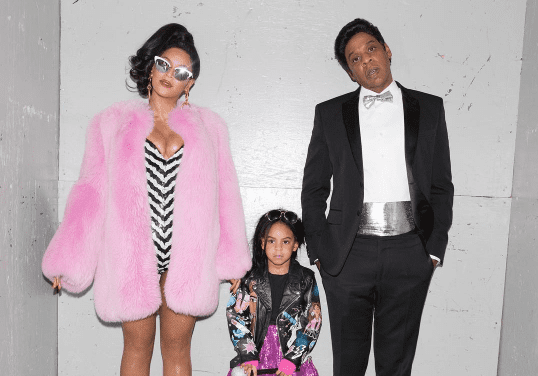 In case you’ve been living under a rock, on Wednesday, Feb. 1, Beyoncé delivered one heck of a midweek pick-me-up when she announced that she’s expecting twins. Not to our surprise, the news sent Twitter into a tizzy. In fact, Beyoncé’s photo announcement nabbed Instagram’s most-liked pic of all time — with nearly 6.4 million […] On Friday morning, Jan. 20, Barack Obama exited the White House on one of the gloomiest inauguration days yet — marking Donald Trump’s ascent as the 45th president of the United States. While the sentiment felt across social media was a mix of disbelief, sadness and even anger, music superstar Beyoncé had just two words for […]

Every time Beyoncé and Blue Ivy slayed in matching outfits Beyoncé and her 4-year-old mini-me, Blue Ivy, recently proved they’re just as stylish as ever. On Friday, Oct. 7, the “Formation” singer shared a series of adorable snaps and videos on Instagram featuring the mother-daughter duo slaying the fashion game — literally. In case you missed it, Beyoncé and Blue Ivy totally inspired #MotherDaughterGoals everywhere this week when they debuted a super cute summer look in matching floral Gucci frocks. Of course, this isn’t the first time the Carter women have taken to Instagram, showcasing their precious relationship. For 25 times Bey and Blue have stolen our […]

Beyoncé slays: Her most iconic looks In case you missed it, earlier this week, Beyoncé was honored with the Fashion Icon Award at the 2016 CFDA Awards. While it’s no surprise that the entertainer whose iconic style has inspired a variety of trends walked away with the honor, the pop star revealed it’s actually her mother, Tina Knowles, who inspires her […]