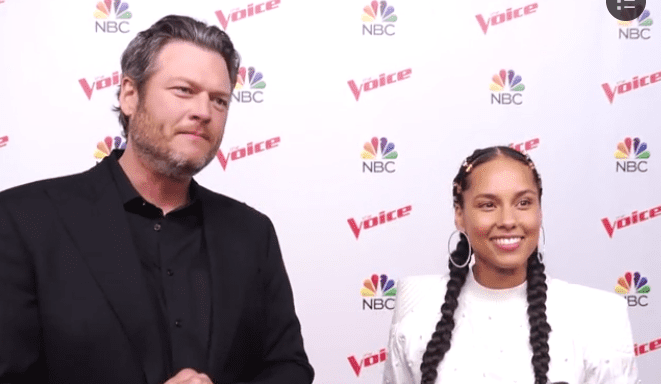 Alicia Keys works with new singers by coaching them to bring out their best vocals and inspires them to be true and “pure.” Here’s Alicia and country singer Blake Shelton on the red carpet of their show ‘The Voice’. [jwplatform W8cB6CM0] What are you listening to? ‘Shakira’

Sexy singer Shakira returns on her latest, self-titled album–her first since becoming a mother last year. Though she’s not quite the pop culture ingenue she was when she emerged in the late 90s/early 2000s, the booty-shaking beauty is still quite the compelling artist. So it’s a shame that so much of what makes Shakira Shakira gets lost on Shakira.

Tessanne Chin of Kingston, 28-year-old of Jamaica was crowned the winner of season five of ‘The Voice.’ Chin won the show with her performance of Whitney Houston’s “I Have Nothing.”Coach Adam Levine was so happy that he gave his singer Tessanne a peck on the cheek after she was named “The Voice.” She fought back tears […]

Who will be named the winner on ‘The Voice?’

Will it be Team Blake or Team Usher? With only three contestants remaining, last night’s performances were the last chance. But before the finalists took the stage, they watched all four coaches do what they do best as they performed The Beatles hit, “With a Little Help From My Friends.”  The Swon Brothers, Danielle, and Michelle […]

It’s down to the top five on NBC’s “The Voice,” and the semifinal round was an especially heated one.  Last night’s performances will lead only three singers  to next week’s finale. During last night’s show, Usher took the stage to perform his new single, “Twisted,” showing his team of one what his untraditional methods of practicing leads […]

Monday was the showdown of the top six on “The Voice.” The contestants found themselves in the spotlight in another week of live performances in an attempt to win America’s vote. This time, they performed two songs each, one of their choice  and the other was selected by their coaches. Blake Shelton is in the lead with three […]

Monday night’s performances by Team Blake’s, Danielle Bradbery and Team Adam’s Judith Hill remained safe. America then saved Team Usher’s, Michelle Chamuel and Team Shakira’s Sasha Allen. Due to the tragedy in Oklahoma, Coach Blake Shelton, an Oklahoma native and wife Miranda Lambert delivered a heartfelt version of her song, “Over You” dedicated to the victims of the devastating tornado.Coach Blake […]

‘The Voice’ recap: The competition heats up

This week on ‘The Voice’ was extra hot-literally. For whatever reason, the studio did not have air but that didn’t affect the performances. However, it did get Usher out of his clothes. Robin Thicke stopped by with Pharrell and T.I. to perform their latest collaboration, “Blurred Lines.” After elimination, there are now 10 performers left to […]

The contestants are a bundle of nerves and the coaches are even worse. It’s down to the final 16 but four have to leave. Who will it be? As America chose two members of each team to save, it was up to the coaches to make the final choice for the last slot. Adam and […]

The final knockout round had it’s ups and downs as the decisions were made. Audrey who is normally strong with her vocals seemed to be a nervous wreck and just couldn’t get it together which sent her home. Cathia blew the judges away but was also sent home; C. Perkins and Vedo battled it out […]

‘The Voice’ recap: The final battle round

Battle rounds wrapped up last night on ‘The Voice,’ with some pretty surprising talent. During the final battle only one judge has the opportunity to ‘steal.’ Usher used his last steal to swoop up latina Cathia after an amazing battle with Mary. Shakira paired the two latino singers to perform one of her Latin songs that she […]

This week’s battles on “The Voice” started with a refreshing performance from Team Usher. Jessica Childress and Vedo’s emotional performance was the best of the night and set the stage for a night of superb battles. See how the teams competed in part four of the battle rounds.

‘The Voice’ recap: The battles continue

It just keeps getting better. The battles and the steals continued on Tuesday night’s episode of The Voice.  Once again coaches realized they made mistakes with some of the pairings which forced them to eliminate some of their strong singers and face having them stolen by another coach. See who moved on and who was eliminated […]

‘The Voice’ recap: The battles begin

The battleground separates the pros from the amateurs. Judges had to make tough decisions and send artists home. Luckily for some of the artists, the “steals” are back this season. Guest mentors Hillary Scott, Joel Madden, Sheryl Crow and Pharrell were available to help with the competitive duets. One coach used both steals during the first […]

Kelly Clarkson revealed during a quick interview backstage at the ACM Awards that Blake Shelton would not only be singing at her upcoming wedding, but he will also be conducting the ceremony. Clarkson is set to marry Shelton’s, manager, Brandon Blackstock after announcing their engagement in December 2012. If Blake is as lively at the wedding […]

The competition just gets better with each show. It seems that every guy on the show loves Shakira and the women are loving Usher. However, in the end each coach added two new performers to their teams. First to hit the stage, former Ford model, Audrey Karrasch. After her performance, it as pretty obvious she […]

Part three of the blind auditions of “The Voice,” brought new talent to the stage and new battles amongst the coaches. The coaches kept the fights going all night long as they attempt to fill their teams with the best singers. First up, The Swon brother duo from Oklahoma. The brothers are the third duo […]

Usher is the latest male celebrity to join the panel of judges on television. While he brings the sexy to “The Voice,” other male celebs are also adding additional reasons to tune into reality shows. See which male judges are heating up the airways on reality tv here.