Chef Roblé shares his kitchen must-haves for this holiday season 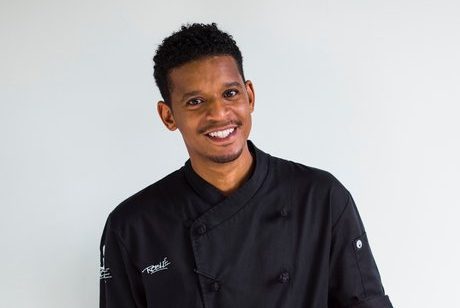 As Christmas quickly approaches and many rush to get last minute gifts for under the tree, the chefs of the house work on their plans for the perfect Christmas meal. International cooking sensation Chef Roblé Ali is known for taking traditional meals and making them into beautiful cuisine. Rolling out caught up with Ali to find […] The unexpected win of President-elect Donald Trump has left many wondering what the country will look like over the next four years. From immigration laws to world relations, no policy discussion has been left untouched. On Thursday, Nov. 11, Atlanta’s top leaders in medicine came together to discuss the future health care. Co-hosted by powerhouse husband and […] Georgia Academy of Family Physicians President-elect Eddie Richardson, M.D. and his wife Jameelah Gater, M.D. are two brilliant doctors who have taken health and holistic care to new heights. There’s Dr. Richardson who after receiving his Doctor of Medicine from Morehouse School of Medicine, completed his residency at The Medical Center in Columbus, Georgia. In 2009, he also […] The BMW ride and drive experience just keeps getting better as the tour moves around the country. The most recent stop in Dallas had all the elements of an especially fun way to start your Saturday night before heading out or just returning home. Everyone had a chance to drive their favorite BMW and, of […] The Essence 2015 festival in New Orleans was a complete blast and the place was crawling with celebrities. Chef Roblé was spotted looking very stylish. Selma director/writer Ava DuVernay was seen up front checking out Missy Elliot’s incredible performance. Cynthia Bailey of “Real Housewives of Atlanta” was seen spying on Noel and her date. “Fashion Queens’” […]

[jwplatform akcIGD4h-cLZpqEsi] Call it a night to remember at the Atlanta Motor Speedway, as BMW allowed us to satisfy our need for speed during one incredible night of test driving the luxurious 6 and 7 Series, as well as the exhilarating M Series vehicles.

Recently, the AKOO Clothing Co., partnered with prominent hip-hop photographer and director Jonathan Mannion for a Limited Edition AKOOxMANNION Collection, inspired by various shots snapped by Mannion. To celebrate the May release of the collaboration, Mannion hosted a private gifting suite at the Double Cross Vodka Lounge in New York City, where some of his […]

Dark and Lovely hosts an ‘Au Naturale’ event at No. 8

Gather up all your “curlfriends.” Dark and Lovely introduces a new line of products perfect for the gals who like to wear their hair “Au Naturale.” On Feb. 27 Dark and Lovely hosted a posh hair event at No. 8 in New York City hosted by recording artist Marsha Ambrosius. Once invitees walked through the event doors they were […]

You may remember Artie Thompson as the creative connoisseur who served as the director of events on reality television show Chef Roblé and Co., but the celebrity event planner has talents that extend beyond what you see in the digital space. With over 20 years of experience working with high-end and celebrity clientele, Thompson has developed […]

Chef Roblé, Saada Ahmed and friends spent their afternoon at the Everyday People Brunch presented by SKYY Vodka’s House of Moscato in Chicago. Hundreds turned out for the Sunday party at Sawtooth Lounge. Guests enjoyed a special curated menu by the Bravo TV chef, signature cocktails made with new SKYY Infusions Moscato Grape and tunes by DJ Moma that took the party well into the […]

Harlem Arts Alliance Presents: On the “A” w/Souleo  When considered unsung, you learn to be grateful for every honor received. For The Legendary Intruders, one of those moments of appreciation occurred at last week’s Motown to Def Jam: Love Train gallery talk where two of their songs (“I’ll Always Love My Mama” and “Save the Children”) have served as […]

LaLa Anthony is slim and trim!

Celebrity chef Roblé Ali, head chef and owner of Roblé & Co. Catering of Bravo fame, expertly pairs his cuisine with wines, vodkas and whiskeys. Whether making an appearance during New York Fashion Week for the Mataano Spring/Summer 2013 fashion show where he paired Loca Linda Malbec Rosé, a light and lively wine with hints […]

Who can’t love watching one of the coolest and hippest chefs on TV on the Bravo show “Chef Roble & Co” Roble began developing his style and cooking technique at an early age and he learned much of it from watching his grandfather cook. Born in Houston, Texas but now residing in New York, he […]