Emmy Award-winning director Ali LeRoi, and co-creator of the iconic “Everybody Hates Chris” sitcom, is now at the helm of theeerie thriller “American Refugee.” This film is an examination of what happens to a troubled married couple, Greg and Helen Taylor (played by Derek Luke and Erika Alexander) when they flee American anarchy and seek […] 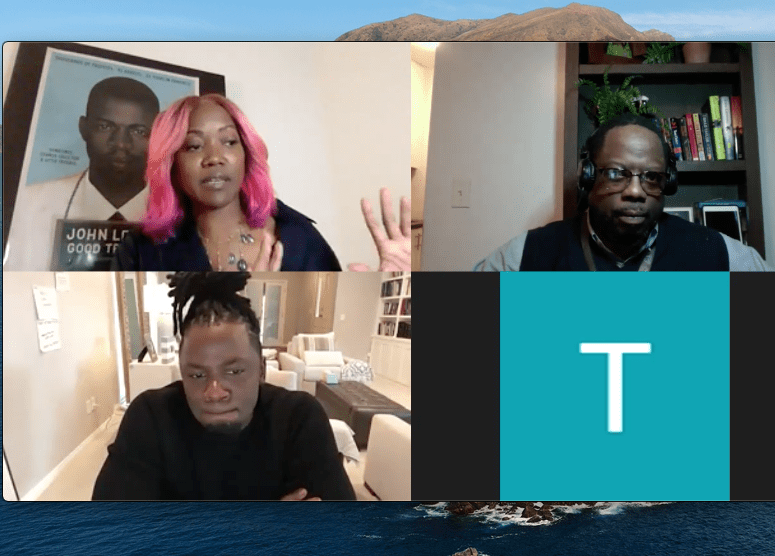 Greg (Derek Luke) and Helen Taylor (Erika Alexander) are desperately seeking asylum in a neighbor’s bunker following the collapse of American society. The family quickly realizes that this so-called sanctuary in a basement shelter — which is owned by a family of a different race with very different ideas — could wind up being their […]

Stars: Paula Patton, Taye Diggs, Jill Scott, Djimon Hounsou, Boris Kodjoe, Derek Luke, Trey Songz This delightful rom-com from director David E. Talbert may have a sensibility straight from the 1950s (do modern women really care whether a younger sister marries first?), but its heart is in the right place — and its funny bone. […]

Story by Yvette Caslin Photography by DeWayne Rogers In an extreme case of sibling rivalry, flight attendant Montana Moore is determined to find Mr. Right in 30 days. She must. It’s the only chance she has of preserving her image and getting engaged before her youngest sister’s wedding. Besides, she can’t just be any ole […]

Black celebs attend the Urbanworld film festival  A bevy of black celebs swarmed the 17th annual Urbanworld Film Festival presented by BET Networks this week in Manhattan. Stars packed the SVA theater for a screening of Baggage Claim and mixed and mingled with the cast. Director David E. Talbert was on hand to present the film along with his wife […]

Director David E. Talbert, actor Derek Luke and others were in Atlanta for the private pre-screening of the new movie Baggage Claim at Regal Atlantic Station. The movie is packed with talented actors and actresses like leading lady Paula Patton, Taye Diggs, Boris Kodjoe, Jill Scott, Trey Songz, Tia Mowery and many more. Baggage Claim is about a flight attendant played […]

With Will Smith and Jamie Foxx in their mid-40s and Denzel Washington almost 60, where are the next generation of A-List black actors?

David Talbert’s Baggage Claim movie advance screening and after reception was a great ending to Friday’s National Urban League national conference in Philadelphia. Not only was the movie an excellent romantic comedy with all of my favorite stars including leads Paula Patton and Derek Luke, along with Jill Scott, Taye Diggs, Taraji Henson, Boris Kodjoe, Djimon Hounsou, […]

Check out the cute couples who walked the BET Awards red carpet.

MIAMI — Fresh off of vanquishing the formidable San Antonio Spurs for the 2013 NBA championship, Miami Heat marquee talents LeBron James and Dwyane Wade have been partying nonstop throughout South Beach. The two superstars also took time out of their busy summer schedule to attend the movie premiere of another superstar, red-hot comedian Kevin […]

Detroit has long been known for it’s culture of invention and reinvention across industries — the obvious — auto manufacturing which earned it the Motor City moniker, and music which gave rise to the legendary Motown sound. And despite reports to the contrary, the springwell of homegrown talent is thriving and exposing a new crop […]

‘Red Tails’ Movie Promoted by Black Celebrities; See Who and What They Said

The Red Tails movie got the highest endorsement possible a week before it even opened when President Obama and first lady Michelle Obama hosted a White House screening that included a group of Tuskegee Airmen. The George Lucas film about an all-black squadron of World War II fighter pilots was treated like a an STD […]

Another Shakeup in the Will and Jada Pinkett Smith Camp

Jada Pinkett Smith’s hour-long medical drama, “HawthoRNe,” just got the ol’ ax from TNT. The network cited a sharp decline in viewership over this time last season, down to 2.4 million from 3.2 million. Viewers and former viewers cited via Facebook and Twitter the dark turn the show took with season three, which saw the […]

We’ve been misled. Somewhere along the way, somebody got the notion that good guys finish last, but I recently discovered that’s a flat out lie. We’ve perpetuated that untruth throughout the years, but now I’ve got a case in point for you that will prove otherwise. You’ve seen Antwone Fisher, Notorious and Friday Night Lights, […]

Black America fell in love with actor Derek Luke when he was first introduced to moviegoers through his critically acclaimed portrayal of Antwone Fisher. The film, by the same name, was directed by Denzel Washington, who also starred in it with Luke.  The movie’s main character, Fisher’s journey in the film begot an endearing personality […]

Derek Luke exemplifies what it means to be a Renaissance man. He continues to build on his impressive body of work and is currently featured as Dr. Miles Bourdet on TNT’s hit show “HawthoRNe.” He also will portray the comic book character, “Gabe Jones,” in the film adaptation of Marvel’s Captain American. Luke brought his […]