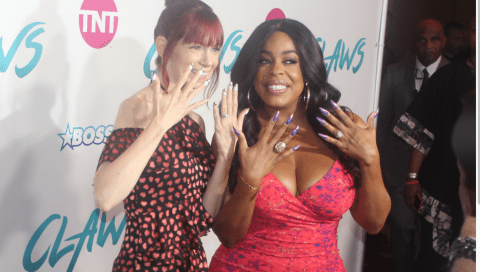 Niecy Nash and Karrueche Tran led the promo tours for the TNT network show “Claws” in three major cities. One of the first stops was Atlanta, where Nash (who plays Desna Simms) was joined by four other cast mates: Carrie Preston (Polly), Jack Kesy (Roller), and Jimmy Jean-Louis (Dr. Gregory Ruval). The screening was followed […]

Marques Houston and Karrueche Tran star in a romantic comedy Marques Houston and Karrueche Tran had the internet buzzing on Friday when Houston made a comment on Tran’s Instagram page. It was allegedly taken by Chris Brown’s crew #TeamBreezy as flirtation and according to a few sources, Houston received several threats based on his comments. Now that we know Tran plays Houston’s love interest in a Chris […]

Women who stayed with their men through incarceration

It can be a challenge to preserve a relationship under good circumstances, but it’s even more difficult when your loved one is incarcerated. While many women would have left, the following ladies remained strong and stood by their man’s side despite the difficult circumstances. Not rain, nor sleet, nor snow… nor federal prison would keep […]

While an L.A. spin-off of one of VH1’s highest-rated shows “Love and Hip Hop” only seems natural, reports state that producers have been unable to land a big name star! According to TMZ, “Producers initially planned to attach Ray J as the headliner but he’s currently tied up hosting “Bad Girls Club All-Stars” on Oxygen […]

During her downtime away from boyfriend Chris Brown, who is away at rehab, Karreuche Tran is filling up her modeling portfolio. Tran, 25, channels her inner model, in an intimate photo shoot, captured by photographer Mike Ho. Ho, along with Tran’s publicist J.Ryan La Cour and MTV Producer Branden King comment on the shoot saying […]

Karrueche Tran’s innocent, if flippant, remark about the late beloved singer Aaliyah set off fireworks on Twitter. Chris Brown’s on-and-off girlfriend told her Instagram followers that she was taking an Aaliyah coloring book on a flight with her. After she was subsequently thrashed by Aaliyah fans for that remark — including calls for Karrueche’s plane […]

Coupled up: Chris Brown and Karreuche Tran spend a little QT at the 2013 O.C. Fair

Where is Rihanna? After rumors that Karreuche Tran had once again called it quits with r&b bad boy Chris Brown late last month, the two were spotted coupled up at the 2013 Orange County Fair. While Brown played nice with fans and kissed babies, Tran cleaned up at the games. After a few legal bumps […]

Top clubs where Rihanna likes to party during Grammy season.

Chris Brown’s on-again, off-again girlfriend Karrueche Tran’ hit the street of Atlanta this weekend for a little PR and partying as she gave back and gave a preview of her clothing line The Kill. The current rolling out cover girl sat down with Atlanta’s Streetz 94.5 to chat about the come up, Chris vs. Drake […]

This news will probably excite the legion of Rihanna fans worldwide. She has finally dumped Chris Brown once and for all. This is according to allhiphop.com, which wrote: “Chris did something with some other chick in another country and this set Rihanna off. Not to mention, CB is supposedly dating his ex or whatever she […]

It’s clear that there was a lot of Rihanna love in the arena last week at the 2012 MTV Video Music Awards. From A$AP Rocky’s infamous butt grab to Katy Perry’s BFF love to Kevin Hart’s excitement over the Bajan beauty’s Best Video win, it’s clear that everyone wanted a piece of Ms. Fenty. But […]