T.I. blasts the critics of his divorce from Tiny Harris 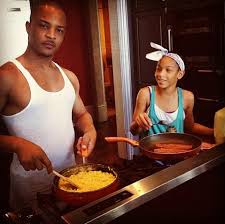 Rap royalty T.I. has confirmed that he is, in fact, getting a divorce from Tameka “Tiny” Harris. But Tip does not care in the slightest about his fans’ and critics’ input about the matter — including who may or may not be at fault and the rumors of infidelity – so he admonishes those in the streets […]

Is there trouble in paradise for T.I. and Tameka ‘Tiny’ Harris? Tameka “Tiny” Harris is responding to rumors that she and her rapper husband T.I. are headed for divorce. According to a rep for the “T.I. & Tiny: The Family Hustle” stars, Harris, 41, “has read so much about her marriage in the past few weeks that it’s time to set the record straight and really […]

T.I. accused of fathering a baby outside his marriage

T.I. cheats on Tiny, fathers a baby? After a feuding with his wife Tiny on Instagram, T.I. is facing a devastating rumor that he cheated and fathered a baby outside his marriage. Just last week rumors ran rampant that T.I. and Tiny were splitting after they both posted not so cryptic photos and captions on Instagram […]

Shekinah Jo denies T.I. and Tiny separation After a rumor broke Monday that a hip-hop super couple was on the outs, a close friend of the couple is attempting to clear the air. Shekinah Jo, who co-stars alongside T.I. and Tiny on their hit reality show, recently used Twitter to deny that the couple was […]

T.I. and Tiny separate? A rumor is slowly but surely gaining traction online, one that says hip-hop super couple T.I. and Tiny have separated. The twosome was spotted in Los Angeles this weekend for the 56th annual Grammy awards with several members of their entourage (below). On Sunday, however, T.I. and Tiny seemed to be […]