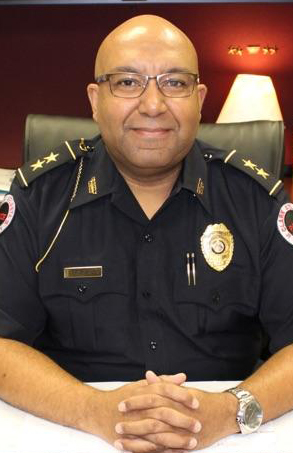 “We are very fortunate to have a professional of Randell Robinson’s integrity, professional experience and compassion for others joining our ranks,” Little says. “He began his career in 1985 as a patrol officer, responsible for Zone Three crime prevention, protecting citizens and their property. He brings that same mindset to CAU. Even more important, he is a proven leader who emphasizes education over apprehension.” Robinson, for example, created and implemented the Atlanta Citizens Police Academy, designed to familiarize community leaders with APD operations, which still exists today. “He is a natural bridge-builder,” Little adds.

“I am excited about the opportunity to be part of the Clark Atlanta University Community,” Robinson says. “I have long respected the University’s record of scholarship and, as someone who has worked extensively in the community, I know well the foundational role that Clark College and Atlanta University have played in supporting and uplifting people across the street and across the nation. Times have changed, of course, so I want to ensure that this tradition continues unimpeded by issues associated with crime, public and personal safety.”

In addition to serving as a Zone Three patrol officer, Robinson also served as part of Atlanta’s Hartsfield International Airport K-9 Bomb Detection Team from 1985-1993. From 1993 to 1999, he served as sergeant of APD’s Field Operations Division, promoting community policing in Atlanta’s public housing developments. He also trained police recruits. From 1999 to 2010, he served as lieutenant, working as assistant Zone Two commander to establish relationships and coordinate activities with citizens, businesses and government agencies. He also served as school detectives commander, addressing public safety concerns for all of Atlanta’s public schools. As criminal investigations commander, he managed the commercial robbery, major fraud, pawn desk and auto theft task force units. As lieutenant, he also served as Homicide, Adult Missing Persons and General Investigations Unit commander, and oversaw investigations in the Sex Crimes Unit, where he organized and participated in meetings to disseminate intelligence and prevention information in high-incidence areas. In 2010, Robinson was appointed captain and was responsible for managing daily administrative law enforcement personnel in Zone Two and the Airport Section, coordinating operations with local, state and federal partners.

During his career, he received a City of Atlanta proclamation for successfully investigating and arresting an individual responsible for a 17-year-old’s death. He also was recognized for personally capturing a rape suspect and, subsequently, for personally responding to and locating the perpetrator of a fatal police shooting.

Deputy Chief Robinson earned his Associates of Science degree in Criminal Justice from Georgia Military College, as well as the Bachelor of Applied Studies in Organizational Leadership from Mercer University. He graduated from the Georgia Law Enforcement Command College at Columbus State University, where he also earned his Master of Public Administration. He also completed the Rising Star Leadership Development Program at Clark Atlanta University, and is a member of the Georgia Association of Chiefs of Police.