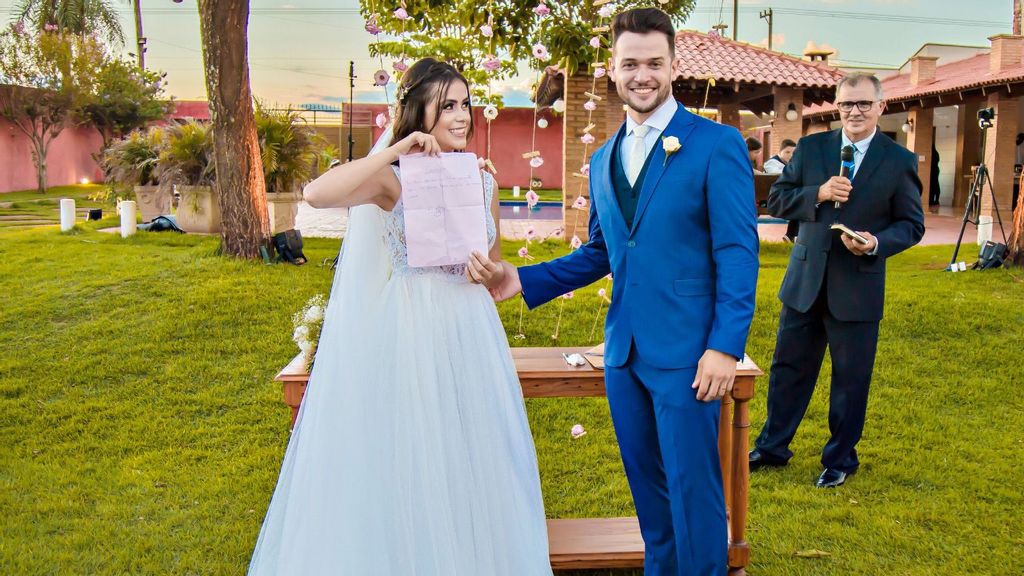 A hapless new husband has signed an agreement to wash the dishes every day after his bride whipped out a contract at the altar.

Bride Jaqueline Miranda Bomfim was still in her wedding dress when she gave the papers to her new husband, Lucas, and handed him a pen.

Footage of the signing – later posted to social media – shows Jaqueline triumphantly holding up the inked contract while the couple’s guests cheer.

The footage quickly made the rounds on social media in Latin America, and now Zenger News has spoken to Jaqueline in an exclusive interview about the stunt.

She told how the big day unfolded in the south-eastern Brazilian state of Sao Paulo, in February, with the images only coming to the attention of social media users and local media at the end of March.

Jaqueline married Lucas in a traditional ceremony, with their friends and family in attendance.

She can be seen in the footage wearing a beautiful, white dress, while Lucas is seen sporting a slick, electric blue suit.

But later in the footage, she can be seen holding a pen as a man, who she later said was her dad, hands her a piece of paper.

The piece of paper was a contract in which Lucas pledged to wash the dishes every day.

She hands him the contract and, although he is a little startled at first, he can be seen chuckling as he happily signs it.

Jaqueline said that she had come up with the idea “as a joke” while “writing my vows”.

She said she made Lucas promise to wash the dishes the day before but added that he had no idea about the prank she was about to pull on the big day.

She added: “It was a relaxing moment for my vows, I made my guests smile at that moment, and my wedding video was really cool with their joy.”

Lucas even asked the priest marrying them “if it was allowed”, and Jaqueline jokingly said that the clergyman “washed his hands” of the matter.

Jacqueline said she has a strong relationship with Lucas and added: “I didn’t ask for anything more than the dishes, but still he does more! In fact, he teaches me a lot, because I got married without even knowing how to cook, and Lucas already lived alone and knew how to manage a lot.”

She also said: “My relationship is very healthy, we always try to keep it as light as possible, we laugh and joke a lot, but when we have to treat it seriously, we treat it as such.”

And she added that despite all the fun and games, she would describe them as a “traditional” couple.

But she also admitted that they live in a modern world, where the dynamics have evolved.

She said: “We received a lot of criticism, but I confess I don’t care about any of it.

“They think that the woman has to take care of all the domestic chores, and it’s not like that, today the world has changed, and we even share the bills.”

Speaking about her new hubby, Jaqueline said: “Lucas is a very nice person, calm, and he knows me very well.

“You know that after all, it was just a joke.

“I always ask him if he’s feeling bad about the critical comments, he says no, he doesn’t care.”