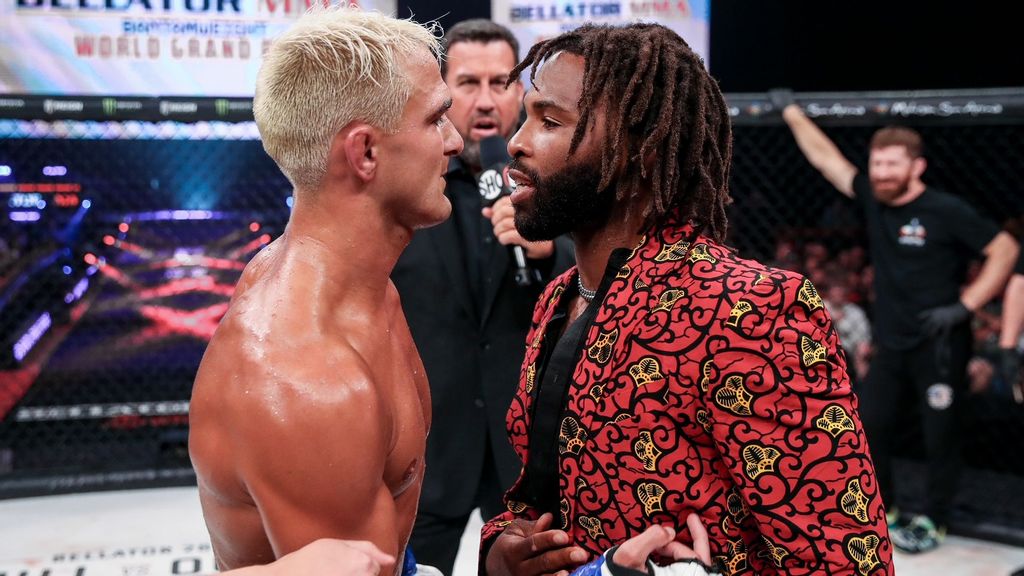 Currently riding a 10-fight winning streak, his lone loss coming in 2017, Stots feels mentally and physically on top. That spells trouble for opponents.

Danny Sabatello seems to have punched his ticket to take on Stots — after Sabatello unanimously defeated Leandro Higo at Bellator 282 on June 24. A heated exchanged between Stots and Sabatello during the post-fight interview set the stage for a showdown later this year.

Stots talks strategies with Zenger on how he plans to beat Sabatello.

Zenger: We know how great you are in the cage, but you sounded pretty comfortable commentating Friday night’s Bellator card, as well.

Stots: The commentating was dope. It was a lot of fun. I had a blast.

Zenger: You were cage-side analyzing potential opponents. Were you dialed in scouting or commentating from a fan perspective?

Stots: That was one of the reasons I wanted to do it. To come and get a close look. I wanted to feel the pressure of the moment and see what they can create. That was huge. It’s definitely different from being at home watching. I was able to feel what was going on inside the cage — or lack thereof — in terms of the Danny Sabatello fight. It was fun.

Zenger: In another interview, you said that since COVID, you removed self-doubt. Was the self-doubt mental or something you changed in training?

Stots: We couldn’t really practice during COVID to where I could rely on my coaches to teach me things. So I started learning stuff on my own. Then I started diving into the mental part of being an athlete — and a successful person. That was one of the affirmations I decided to create. That affirmation is that I’m confident and fearless in all that I do. I dominate, excite and finish fights. I’m Raufeon Stots, the Bellator world champion. I know that is who I am now. I embody that, and I’m not a doubtful person in anything I do.

Zenger: Since knocking out Juan Archuleta, do you feel pressured to top or repeat that performance?

Stots: The key for me is to focus on the moment. I can’t really worry about being better than I was last time, or what I have to do in the future. Good things happen when I’m in the moment. I feel like the one time I lost, I was too busy looking forward to things that were going to happen after I got the win, instead of focusing on what was occurring right in front of my face. In fighting, things can change in a second, so I definitely gotta be present.

Zenger: Your only loss came in 2017. You have won 10 consecutive fights since then. What is the key to this winning streak?

Stots: That fight taught me something, something that was missing in my game. It was on the mental side. It wasn’t really in my training. I have the best coaches and training regimen. I learned from the best in the game. It was a mental thing and now my mental is dialed in. That, coupled with my confidence and growing skill-set, I feel unbeatable right now. It’s a testament to what is occurring in my life over the past five-to-seven years.

Zenger: You seem to understand the entertainment aspect of fighting. How important is that in today’s climate, where self-promotion is key?

Stots: The talking part is really fun for me. The talking stuff is just extra. That’s my personality. It’s how I grew up. It’s my pastime. I like to play Fortnite and talk trash to my friends. I understand that none of that works unless you’re backing up what you’re saying. You have to go out there and perform well. I’m dialed in to MMA and the sport, so no matter what I’m saying or doing, I’m getting better in my sport.

There are so many things you can get good at in MMA, so every day, I’m doing something to better myself in my craft. I’m really good at fighting; the talking is just fun to me.

Zenger: How does a fight between you and Danny Sabatello play out?

Stots: We’re both good wrestlers. Unfortunately, he doesn’t have any skills past wrestling. I feel like if our wrestling cancels itself out, it’s going to be a long night for him. If he decides to engage me anywhere besides wrestling, the skill gap is too big. I said this before I was fighting him, I was rooting for him. But I didn’t know if he could make it because of his skill-set.

It’s so one dimensional, but luckily, he’s been able to fight people who don’t have good wrestling. I fought a lot of wrestlers, I wrestled myself, so I have a lot of those skills. I feel like there is nowhere he poses a threat. Even if he takes me down, there’s no way he can hold me down. It’s going to either be a long night or a really short night in my favor. I just don’t see anywhere he’s better. Maybe if he had finishing capabilities, I would think he can catch me with something, but I don’t see that. I don’t see power in his hands, I don’t see the threat of a submission, it’s just wrestling. My last opponent thought that would be the way to beat me.

Hopefully, he comes up with something in these next few months. I just don’t see a route to victory for him.

Zenger: You have your sights set on that million-dollar prize. To win it, you obviously have to win a few more fights, but the ultimate test would be against your friend, Sergio Pettis. Not to look too far ahead, but have you wrapped your head around potentially having to put the personal to the side and handle business with Pettis?

Stots: I try not to think about that. To fight Sergio &mldr; I feel like he would be my toughest opponent. People don’t realize the work he’s put in to be a well-rounded fighter. Our styles are similar. Our striking ideologies are similar. We know each other’s weaknesses and strengths. A fight with him will be the ultimate chess match, the ultimate physicality match, and it’s going to be real violent. It will be a grueling fight. The best man is going to win, but it will be a grueling fight.

Stots: Sabatello sucks! The hardest part of this fight is going to be breaking down footage of him, because I fall asleep every time, I watch him fight.