O’Shea Jackson Jr., the successful son of rap and screen legend Ice Cube, bristles at the term “nepo baby” which is used to describe the offspring of famous parents.

For the uninitiated, “nepo baby” is short for “nepotism baby,” and is seen as a belittling term used to diss and dismiss folks whose accomplishments are credited to their relationships with a famous family member, most often a celebrated parent.

The topic was broached due to the recent New York Times article, “She has her mother’s eyes. And agent,” which explores how the offspring of entertainment dynasties are dominating the headlines and box office. This includes the likes of John David Washington, the son of the venerated Oscar-winner Denzel Washington, as well as Zöe Kravitz whpo is the daughter of Lenny Kravitz, Lily-Rose Depp, daughter of Johnny Depp, and Brooklyn Beckham, daughter of Victoria Beckham.  In fact, the NYT published a complete story unveiling the “Year of the Nepo Baby.”

Jackson, who shot to stardom playing his father in the gripping biographical film Straight Outta Compton which detailed the rise and fall of the pioneering NWA rap group, resolutely stated that folks like him earned his lot in life, though they got help from their parents.

My dad told me in a perfect world, I would play him in straight outta compton. I was already in college for screenwriting at USC. I accepted the challenge. And auditioned for two years before getting the role. After that it was up to me, he couldn’t hold my hand through my career

Jackson continued, saying he doesn’t appreciate the inference that he was bestowed a career because of his patriarchal benefactor, Ice Cube. 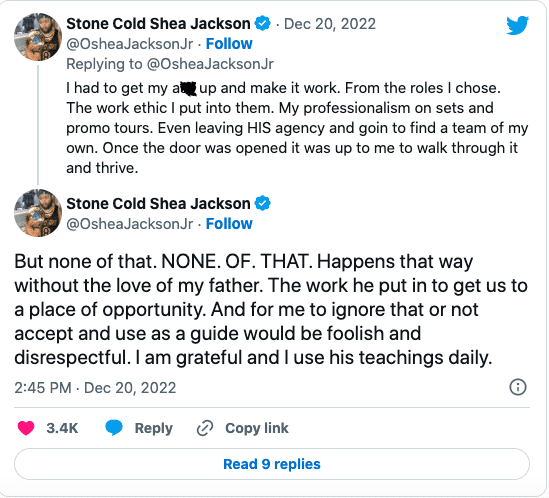 In fact, Jackson is advocating for this generation of urbanites to work to create more entertainment and business empires in order to give a leg up to successive generations. 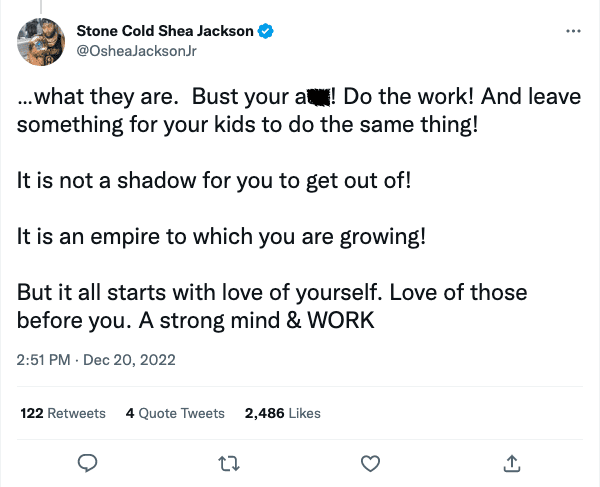 Family first. May everyone who reads this, blaze a trail for their family to be able to walk in the future. And teach them to love themselves. To love their family. And pave the way for the next.

Thank you that was my TED talk.