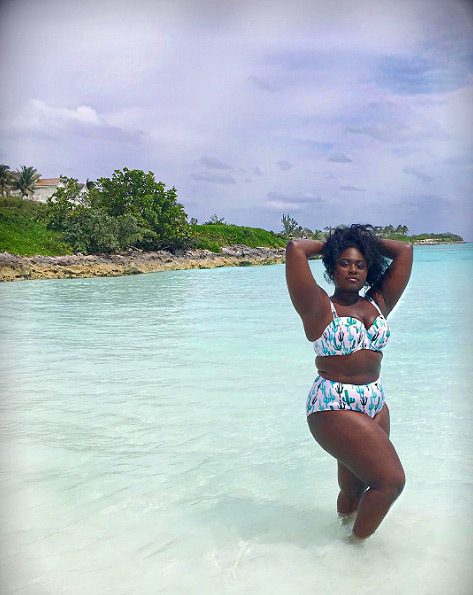 https://www.instagram.com/p/BQBgBQoAhlr/?taken-by=karrueche It’s that time of year again — when celebrities drop their trou’ for sexy swimwear. Kourtney Kardashian, Danielle Brooks, Karrueche, Mariah Carey and more are showcasing their beach bods in trendy bathing suits and separates, inspiring body goals across social media. https://www.instagram.com/p/BR4QnmdDYF9/?taken-by=daniebb3 For a glimpse at stars baring it all (well, almost) in the […] Summer is almost here, and whether you’re working hard toward that bikini body or ready to check out some of this season’s hottest new swim trends, one thing’s for sure — we’re everything but short of inspiration. Take it from stars like Beyoncé, Ciara, Christina Milian, Lupita Nyong’o and Serena Williams. They know how to flaunt […] Let’s hear it for the red, white and blue! Whether you’re on the beach, at a rooftop party or enjoying a backyard summer barbecue, the 4th of July is a momentous and relaxing holiday. When else can you belt out “God Bless America” with a sparkler in one hand a colorful cocktail in the other while […]

Rihanna and her itty bitty bikini hit the beach in Barbados

Rihanna, who’s been spending time back in her hometown in Barbados over the last couple weeks, knows how to keep the party going. Just days after her and BFF Melissa Forde hit up the Crop Over Festival, the pop princess as spotted eating and drinking well on the oceanside located near the city of Bridgetown. […]

Puff and pass: Christina Milian hits the hookah in Miami

A bikini clad Christina Milian celebrated the final taping of ABC’s hit show “The Voice” with a Miami getaway. Milian, 31, hung out by the pool with a group of friends as they smoked electric hookah and soaked up some sun. Check out her mini vacay here. – ruthie hawkins

Australian-born model and girlfriend of funnyman Eddie Murpphy, Paige Butcher, 33, was spotted in Maui soaking up the sun with Murphy’s stunning daughters, Bria and Shayne Murphy. Butcher joined the Murphy girls in the ocean, where they swam and spent the day sunbathing. The girls looked gorgeous in bright itty bitty bikinis and summer accessories. […]

It’s summertime and bikini season is in full effect. Celebrities are often spotted on beaches and pools around the world trying to avoid paparazzi from getting pictures of them in bikinis. Pregnant celebrities who dare to bare their belly on the beaches are typically caught on camera as well. While most seem comfortable with their […]

Celebrity beach bodies that make you go ooh or ugh!

Believe it or not, with all of the plastic and cosmetic surgery options available, there are quite a few very rich celebrities who prefer their natural bodies. For fans and critics, alike, who are accustomed to seeing celebrities airbrushed, we’re shocked when we see them in their natural state. Here, rolling out compiled a list […]