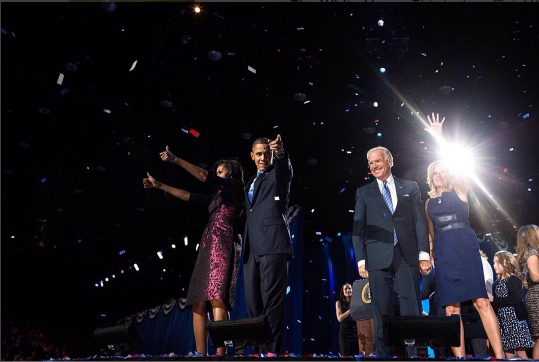 While it’s safe to say that emotions were at an all-time high as millions tuned in to witness President Barack Obama make his farewell address, few likely felt it more deeply than commander-in-chief himself and his daughter Malia, who shed a few tears.

Pulling out a handkerchief to wipe his eyes, Obama immediately made a play for our hearts, as he gushed over his wife of 25-years, first lady Michelle Obama. “Michelle — Michelle LaVaughn Robinson, from the Southside, for the past twenty-five years, you’ve been not only my wife and mother of my children, but my best friend,” he said. “You took on a role you didn’t ask for and made it your own with grace and grit and style and good humor. You made the White House a place that belongs to everybody. And a new generation sets its sights higher because it has you as a role model. You’ve made me proud. You’ve made the country proud.”

The proud father then, of course, steered the focus to his two daughters. “Malia and Sasha, under the strangest of circumstances, you have become two amazing young women, smart and beautiful, but more importantly, kind and thoughtful and full of passion. You wore the burden of years in the spotlight so easily. Of all that I’ve done in my life, I’m most proud to be your dad.”

So proud of POTUS and all that we've accomplished together. What an incredible journey filled with remarkable people. I love you Barack. -mo‎‎

And when addressing the Bidens, Obama expressed his deepest gratitude. “To Joe Biden, the scrappy kid from Scranton who became Delaware’s favorite son: you were the first choice I made as a nominee, and the best,” he stated. “Not just because you have been a great Vice President, but because in the bargain, I gained a brother. We love you and Jill like family, and your friendship has been one of the great joys of our life.”

Being the class act that he is, the president went on to thank his “remarkable staff” for sticking by his side for better or worse.

“For eight years – and for some of you, a whole lot more – I’ve drawn from your energy, and tried to reflect back what you displayed every day: heart, and character, and idealism,” he shared. “I’ve watched you grow up, get married, have kids, and start incredible new journeys of your own. Even when times got tough and frustrating, you never let Washington get the better of you. The only thing that makes me prouder than all the good we’ve done is the thought of all the remarkable things you’ll achieve from here.”

“And to all of you out there — every organizer who moved to an unfamiliar town and kind family who welcomed them in, every volunteer who knocked on doors, every young person who cast a ballot for the first time, every American who lived and breathed the hard work of change – you are the best supporters and organizers anyone could hope for, and I will forever be grateful. Because yes, you changed the world,” Obama continued.

“Being asked to be part of this journey was a great honor. Barack and I and our families have formed a real and lasting bond over this incredible experience. During long hours in the Oval Office and Situation Room, during private lunches and quiet moments, I’ve seen Barack lead this country from economic crisis to recovery to resurgence. I’ve seen him lead the world not just by the example of our power, but by the power of our example…I hope you’ll join me in Chicago as the President speaks about all we’ve accomplished on our journey as a country over the last eight years and the work that’s still ahead.” —@VP Biden reflecting on the last eight years serving the American people alongside President Obama. Tune in at 9pm ET tonight to watch President Obama’s Farewell Address streaming at the link in the bio. #ObamaFarewell

He concluded, “My fellow Americans, it has been the honor of my life to serve you. I won’t stop; in fact, I will be right there with you, as a citizen, for all my days that remain. Yes we can. Yes we did. Yes we can.”

According to CNN, Obama penned his goodbye address himself, cutting out precious time while on vacation over the holidays in Hawaii. His aides reportedly went through at least four drafts before finalizing Tuesday night’s address.

Up next, Obama is said to be returning to the White House in the early morning hours, which will also mark his final flight on Air Force One.