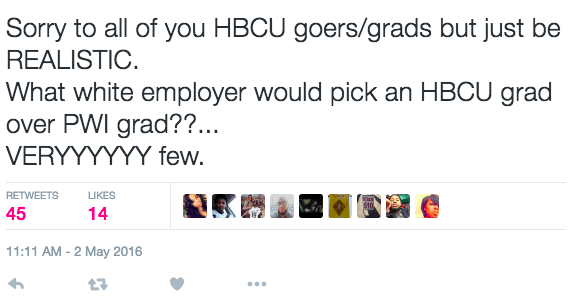 In the last couple of years, one of the most controversial topics among Black millennial students exploded from social media. There’s been a raging debate regarding historically black colleges and universities (HBCU) — schools originally founded to educate those of African American descent — and predominately white institution (PWI) — schools where Whites account for at least 50 percent of student enrollment. In an effort to accuse the other side of “selling out,” college students have now found themselves in a never-ending debate that is furthering the divide in the Black community.

For those who are not aware of the situation, students have been weighing in on this topic for a while, in regard to who is staying true to their roots and not buying into the system that society has tried to set in place. Is it the Black student that attends a PWI that has turned away from their origins to pursue a “better education,” at a place they are not wanted and are still fighting for approval? Or is it the Black student who chose an HBCU that was built for Blacks?

This discussion did not pick up much traction until after the publicized 2015 racial troubles at the University of North Carolina-Charlotte in September, and the University of Missouri in November. Since then many other incidents have gone viral, ranging from racially degrading flyers and emails being sent throughout a campus, and even videos highlighting a racial incident taking place. Many HBCU advocates use social media to express their opinions. They claim students should just go where they are “celebrated not tolerated,” and attend an HBCU. PWI standups counterclaim that action must be taken in order to continue to make clear paths for both present and future Black students.

The debate also involves the idea of which degree holds more weight. Many that attend HBCU’s are often highly offended at the perceived academic inferiority that HBCUs have in comparison to PWIs. Since HBCUs are associated with Blackness, the argument is that it is easy to discredit an education from an HBCU due to people automatically elevating PWIs because of society’s White supremacist stance that White equals superiority. PWIs, on the other hand, believe their education holds more weight due to their successful alumni, the recognizable name that can turn heads, but most importantly their access to resources.

Wealth is not something many HBCUs have had. Many are still fighting for proper funding to this day. Even if all 105 HBCUs were to combine their endowments, it still would equate to less than 10 percent of Harvard’s (upward of $30 billion). What HBCUs lack in funding, they make up in faculty support. The intimate settings make it easier for students to build relations with professors, advisers, etc.

Yet the question remains, who really is the sellout? Opinions will vary but amid the constant bashing of one another, the bigger picture is obscured. Whether or not a student chooses to attend an HBCU or a PWI, it does not add nor subtract to their Blackness nor does it make or break their success. 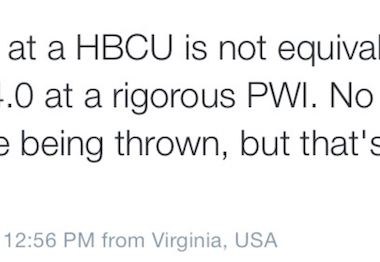 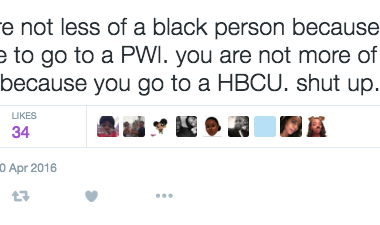 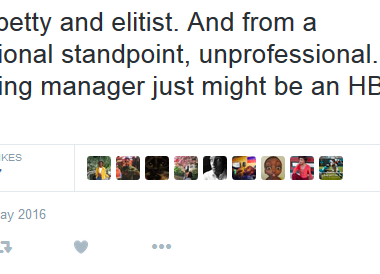 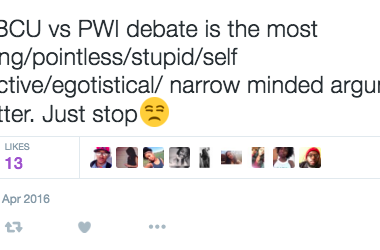 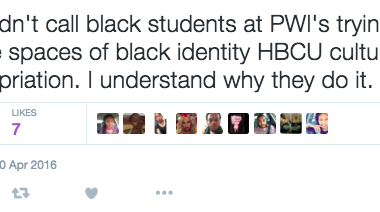