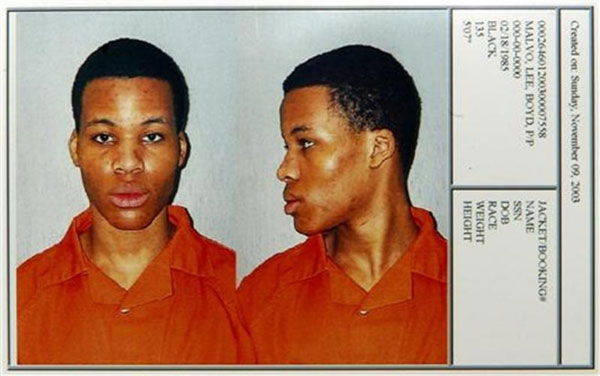 In 2002, the Washington, DC area was gripped in fear as unsuspecting victims were shot by John Allen Muhammad and his teenage stepson Lee Boyd Malvo. The DC Sniper attacks claimed the lives of 17 people and injured three others in Maryland, Virginia, and Washington, D.C.

Muhammad was executed for his crimes in 2009, while Malvo, 17 at the time, was sentenced to life in prison on three capital murder charges and one attempted capital murder charge. Malvo, now 32, was considered by many to be brainwashed by his stepfather into committing the heinous shootings that included a young elementary school student waiting on a ride at school. In a 2012 interview with “Today Show” host Matt Lauer, Malvo stated, “For the entire period when I was almost 15 until I got arrested, I was sexually abused by John Muhammad.”

Last week, US District Judge Raymond Alvin Jackson of the Eastern District of Virginia overturned Malvo’s life sentence declaring it unconstitutional. Judge Jackson’s decision was based on a 2012 US Supreme Court ruling that declared juvenile sentences of life without parole were unconstitutional and a 2016 decision that made the same judgment as retroactive. In making the decision to overturn Malvo’s sentencing, Judge Jackson wrote, “Crucially, neither the plea agreement nor the sentencing judge provided any notification… that, by signing the plea agreement, he was waiving his Eighth Amendment right to a sentencing hearing in which the judge must determine “whether the juvenile offender before it is a child ‘whose crimes reflect transient immaturity’ or is one of ‘those rare children whose crimes reflect irreparable corruption.”

Jackson further wrote that Malvo was entitled to a new sentencing hearing because the Supreme Court’s ruling grants new rights to juveniles that Malvo didn’t know he had when he agreed to a plea bargain. Judge Jackson’s decision can be appealed by the Virginia State Attorney General’s Office and Michael Kelley, a spokesman for the office, stated that it is “reviewing the decision and will do everything possible, including a possible appeal, to make sure this convicted mass murderer serves the life sentences that were originally imposed.”

Prior to the shootings in the D.C. area, Muhammad and Malvo were implicated in a killing that occurred in Tucson, Arizona. There is a possibility that Malvo could be released from prison at some point if the appeal by the state of Virginia fails. Currently, Malvo remains incarcerated at Virginia’s supermax Red Onion State Prison.