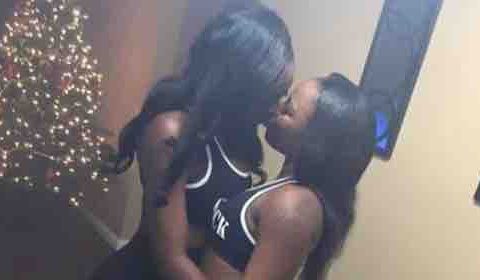 Alternative relationships and threesomes are nothing new in today’s society but two young bBack women are taking it to another level. Iquiriah Vessel of Jackson, Mississippi, recently started a GoFundMe campaign titled “Help Us Make Our Dream Come True.”

Vessel met the love of her life after a mutual relationship with a married man. The trio would regularly engage in threesomes and enjoyed each other’s company. After extended group sex with the married man, the two women developed feelings for one another. Soon, the women fell in love with each other and according to Vessel on the GoFundMe page, “I became pregnant for this married man, in which I had my son May of 2015. June of 2015 is when my fiancé found out she was pregnant by him as well. By this time she and I were already in love. As the years went by our love for one another became so strong, our bond became unbreakable and we decided that we should become one. February 12, 2017, I decided to surprise her by proposing to her in front of everyone at her birthday day party to prove to her how serious I was and how deep my love that I have her was.”

Now the pair has turned to the public and social media for help to live their dream and get married. On Vessel’s Facebook page there are photos of the two women and their seemingly happy children.

The couple is trying to raise $10K for their dream of a TV show to explain the details of their relationship and dispelling misconceptions. Also, they need the money for their wedding on Feb. 12, 2018. It looks like the couple has a long way to go since at press time, only $105 had been raised.