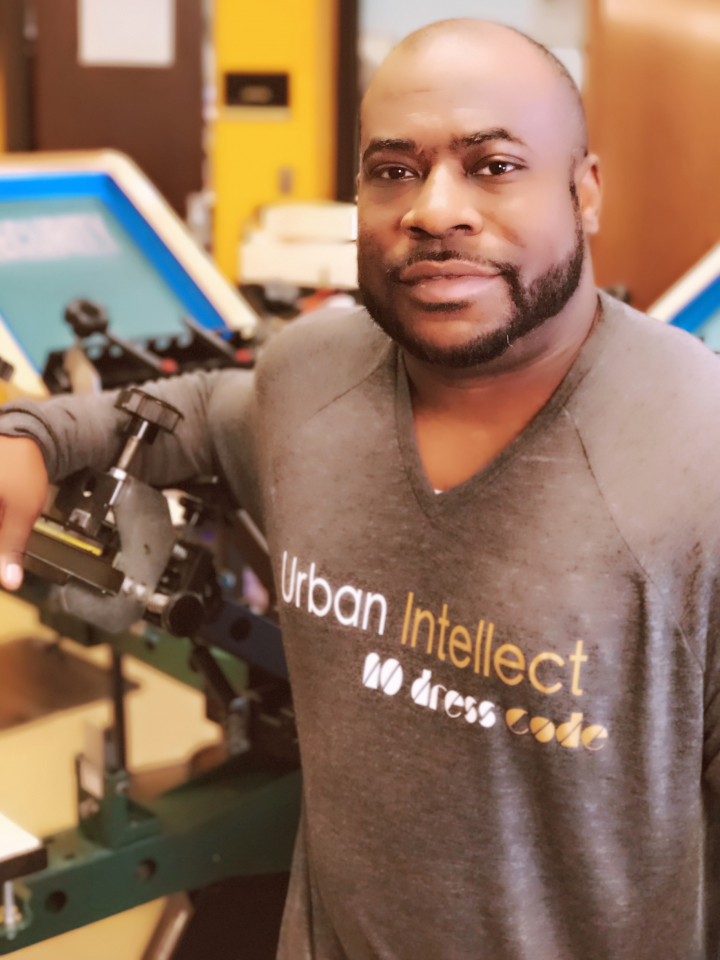 Bernard Tucker is the owner of Brand Visions, a branding company that serves to encourage individuals to be confident in branding their businesses, talents and lifestyles. Here, the entrepreneur shares his vision and why it’s about more than branding.

Tell us about Brand Visions LLC.
Brand Visions provides custom branding on apparel and sublimated items to help market and promote your business ideas to the public. Small ideas become big not only at the right time but also with the right method. The first brand that we began branding was our own clothing line Urban Intellect, which bridges the gap between street smarts and book sense, natural ability and the trained eye. In many ways, Urban Intellect serves as a physical and tangible mission statement for everything that Brand Visions stands for and hopes to accomplish.

Why did you become an entrepreneur?
I’ve been an entrepreneur most of my adult life to one degree or another, with most of it due to having a creative mind that keeps on ticking. Growing up in Hammond, Indiana, I was surrounded by people who owned things in the neighborhood and circulated those dollars amongst each other daily. That served as early fuel for using my creative abilities to become an owner, a driver, and a creator of my own career path. Even on the several occasions where jobs felt good enough to put my dreams on the back burner, that would downsize or lay people off, pushing me right back on that path. In the ’90s, I started an independent record label to produce, record and distribute my own hip-hop/rap music. Those years of experience paved the way for Brand Visions LLC.

How has your music career influenced your company?
My music is an identical reflection of the company that I’ve formed through Brand Visions LLC. Throughout my 20 plus years of writing hip-hop/rap lyrics, my aim was to encourage and empower people to not only see the greatness within, but to really live it. It’s also given me that creative space in which I operate to create my branding ideas. The key difference to me between branding ideas and creating the type of music that I do is that the message through my branding speaks directly to the audience that my music was meant to reach. In some ways, I think the music was “before its time,” whereas Brand Visions is right on time. Either way, one gives life to the other and that will always make them both relevant.

What do you think about racism today?
There’s this phrase that has stuck around with me for years: “make it plain,” which to me sums up racism in the world today. Racism, along with many other forms of social control, has been made plain today, that they’re here and are here to stay. Urban Intellect represents that space of thinking that allows one to navigate around such barriers as racism and classism by using the mind’s natural ability to not be denied. So to answer the question of what do I think about racism today, I believe it’s in fear of the intellectual mindset of what I consider to be sleeping giants awaiting a conscious evolution of thinking.

What type of feedback have you received from your positive messaging?
The feedback has been very positive. What’s real is that urban Intellect is nothing more than just your real conversations that are talked about daily in barbershops, universities, and places of worship. I’m getting to the point where I’m taking the word positive and calling it what it is, the truth. Honestly, it reminds me of how my music was often stuck with the label of just being a positive message, even though lyrically it was very well respected against the best. My vision for this company is to erase those labels that allow people to judge one’s movement before their movement ever gets off the ground.

Where can people follow you to continue experiencing the positive messaging and purchase your clothing?
By visiting our website at www.thebrandvision.com