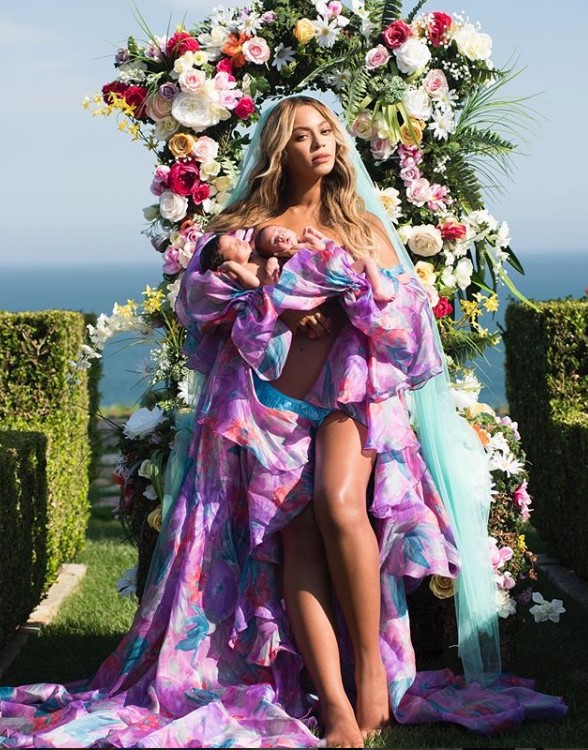 Beyonce wished her twins a happy birthday during her concert on Wednesday, June 13.

The “Crazy in Love” singer gave a shout-out to Rumi and Sir in honor of their first birthday while on stage with her husband Jay Z for their On the Run II concert at the Etihad Stadium in Manchester, North West England.

After performing the “Young Forever/Halo” remix, video footage from fans in the crowd shared on social media showed Beyoncé, 36, turning to her 48-year-old husband — with whom she also has 6-year-old daughter Blue Ivy — and smiling before she said: “Happy birthday to Sir and Rumi. We love you.”

The shout-out comes after the couple revealed via video footage screened during their tour that they had renewed their wedding vows.

The home movie played while the couple performed “Young Forever” and showed them dressed in white and joined by their children at the ceremony, and after the clip, a message flashed up on the screen stating: “This is real love.”

And it was later reported the pair renewed their vows in an “intimate” ceremony in Malibu in April. A source told the new issue of Grazia magazine: “It was Jay’s idea, he wanted to recommit to Beyoncé in front of their closest friends and family … as well as to mark their 10-year anniversary. It wasn’t some big VIP guest list, it was an intimate affair.”

After Beyonce’s Lemonade album fueled speculation she and her husband had been experiencing marriage problems, the pair has been working to put their problems behind them and are now in an “amazing” place.

The source continued: “They are in such an amazing place after all the arguing and distrust they had. “They are now celebrating their love in a way they hadn’t done for years. The tour is the perfect way for them to do that.”