There is normally a certain amount of adversarial tension between former and sitting U.S. presidents mixed with a healthy dose of mutual respect. But in the case of President Barack Obama and President Donald Trump  — or better yet, Trump and every other living president — there appears to be a full-scale Cold War between Trump’s side and his philosophical opponents.

As Trump went on his favorite network, Fox News, to excoriate his predecessor, Obama sojourned to Johannesburg to commemorate the 100th anniversary of the late Nelson Mandela’s birth. While there, Obama warned of the dangerously escalating “politics of fear and resentment and retrenchment” in what he called “strange and uncertain times” during a speech on Tuesday.

In his most dramatic post-White House address to date,  Obama lambasted Trump without ever mentioning the current president’s name during a 90-minute speech at the Nelson Mandela Annual Lecture. The former president perhaps felt compelled to address his successor after Trump’s disastrous summit with Russian leader Vladimir Putin in Finland.

“We have to stop pretending that countries that just hold an election, where sometimes the winner somehow magically gets 90 percent of the vote because all the opposition is locked up or can’t get on TV, is a democracy,” Obama said, according to CBS News. 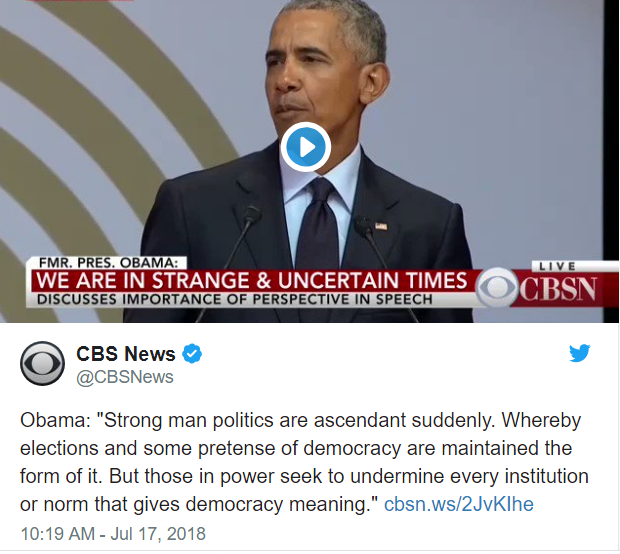 Obama said the undermining of a democracy starts with intentionally criminalizing and dehumanizing the press, which until now has enabled the free flow of information and, most importantly, the facts to reach the populace.

“You have to believe in facts. Without facts, there is no basis for cooperation,” Obama said, according to Quartz Media. “I can find common ground for those who oppose the Paris Accords. For example, they may say, it’s not going to work … or they may say it’s more important to provide cheap energy for the poor even if it means more pollution. At least I can have a debate with them about that, and I can show them why I think clean energy is the better path…I can’t find common ground if somebody says climate change is just a hoax [and] it’s not happening when almost all the world’s scientists say it is. I don’t know how to start talking to you about this. If you start saying it’s an elaborate hoax, I don’t know….Where do we start?”

Obama said he believes the protection of this nation’s sovereignty depends on the press, the electorate and lawmakers alike helping to preserve the First Amendment as hidden powers work to deconstruct these institutions to benefit themselves.

“The denial of facts runs counter to democracy. It could be its undoing,” Obama added, according to Quartz Media. “Which is why we must zealously protect independent media, and we have to guard against the tendency for social media to become purely a platform for spectacle, outrage or disinformation.”

Using the oft-regurgitated phrase “fake news,” Trump has successfully turned right-wing zealots against even the most respected media outlets. Obama said this must be countered with equal or superior force to preserve the press in its present form.

“The free press is under attack. Censorship and state control of media is on the rise,” he added. “Social media — once seen as a mechanism to promote knowledge and understanding and solidarity — has proved to be just as effective in promoting hatred and paranoia and propaganda and conspiracy theories.”