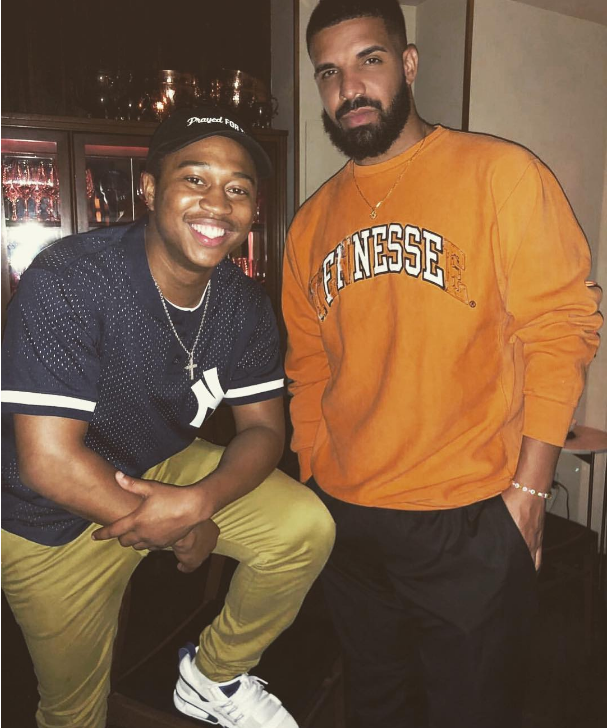 Instagram star and comedian Shiggy has been living 2018 “like it’s golden,” as Jill Scott would sing it. And he is really feeling himself these days to the point where he brushed aside Russell Wilson to take a photo with the quarterback’s wife Ciara at the ESPYs in a video that went viral.

Shiggy was catapulted to national fame when he perfectly impersonated ESPN’s bodacious superstar sports show host, Stephen A. Smith, in a hilarious bit that went viral internationally. Check it out:

Moreover, Shiggy’s fame shot even higher when he helped rapper-singer Drake achieve another No. 1 song on the Billboard pop chart with the #DoTheShiggy #InMyFeelings challenge.

Last month, the social media star posted a video of himself, on a street with traffic going by, dancing to “In My Feelings” from Drake’s recent chart-topping album Scorpion.

The short video quickly accrued more than five million views on Instagram. Pretty soon, many celebrities, as well as aunts and uncles, were getting out of their cars to do the #InMyFeelingsChallenge via #DoTheShiggy. The most famous of the celebs to do the dance included NFL star Odell Beckham and megastar actor Will Smith who posted their versions of the versions of the dance. Incidentally, Ciara and Russell Wilson also did their own version of Shiggy’s dance invention.

When you and Bae #DoTheShiggy On Top of Cape Town on ur #Honeymoon. @DangeRussWilson #InMyFeelingsChallenge

Shiggy, who created the Shiggy Show on the streets of New York and would top off his show with his infectious dances, was rewarded for his meteoric rise in popularity with an invitation to the coveted sports event, The ESPYs, in Los Angeles on June 18.

#Mood : The Red Carpet Got Me In My Feelings ❤️😂😂😂 #espys @espn Stlyed By : @omarlondon

Shiggy captioned the above IG video: “#Mood : The Red Carpet Got Me In My Feelings ❤😂😂😂 #espys@espn Stlyed By : @omarlondon.”

But the real fun popped off when Shiggy gave NFL quarterback Russell Wilson a “stiff arm” when he tried to bypass the Seattle Seahawks star to take a photo alone with his wife, “Goodies” singer Ciara.

Wilson smiled it off and Ciara’s face seemed like it would crack as she tried to play off the embarrassing and uncomfortable moment.

When @TheShiggyShow trying to #LevelUp and take a pic w @Ciara … my girl. U lucky I like ur Lil shiggy dance. Next time u gettin da stiff arm. #DoTheShiggy 😂😂😂🕺🏽🕺🏽🕺🏽💥🥊

Right afterward, Wilson took the slight well and even joked about it. He captioned it: dangerusswilsonWhen @TheShiggyShowtrying to #LevelUp and take a pic w @Ciara … my girl. U lucky I like ur Lil shiggy dance. Next time u gettin da stiff arm.#DoTheShiggy 😂😂😂🕺🏽🕺🏽🕺🏽💥🥊.”

Notice how Shiggy called Wilson “Rusty” as the nickname for “Russell.”