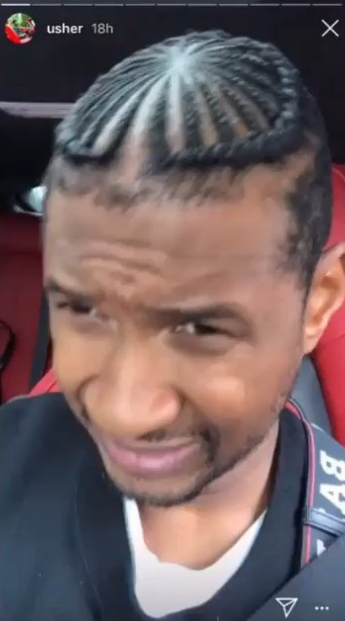 People are raising their eyebrows and looking sideways at R&B singer Usher these days.

Just weeks after the “You Got it Bad” crooner displayed a funny-looking conk hair look, which led to him being ridiculed from one end of cyberspace to the other, he got his hair braided in a style that some fans says a teenage girl might rock.

Pop culture observers are beginning to wonder if Usher Raymond IV, 40, is having a midlife crisis. Others openly wondered if the “Confessions” singer has too much time on his hands now that he has slowed down tremendously on cranking out hit songs and albums.

Check out Usher on Instagram Live furiously patting his head because his braids itch. Then observe the social media beatdown he is subjected to — again — for choosing to get his hair braided in this manner:

@usher come see us fam!!! People & Our Customers have been hitting us up like crazy to save you from “the pat” my brotha! You don’t want to mess up your braids bra! Come visit us at https://t.co/0KpEvDhHcI and check out our Instagram page @ezscratch_hairtool #thepatisover pic.twitter.com/ISbgbk6Fy3

Who braided usher hair like he about to get some crochet braids!?

Wtf is going on with artists from Atlanta and they hair. Young Joc got the church lady perm. And usher got the right little girl with barrettes braids. Wtf

Usher braids look like he bout to get a sew-in

Usher’s new braids? Is this guy going through something pic.twitter.com/WMURVO6zAw

The fact that Usher was patting his braids 🤣🤣🤣🤣😭😭😭 aaaahhhhhh