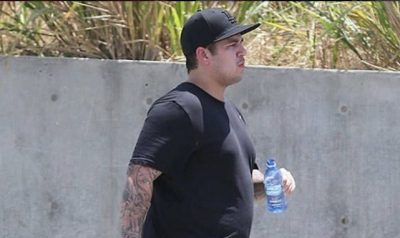 Rob Kardashian is “doing great”.
The “Keeping Up With The Kardashians” star is doing really well, according to his sister Khloe Kardashian and she only wants the best and “what makes him happy”.
She told “Entertainment Tonight,” “Rob is doing great, he really is. You know, he’s been working out … He goes to Kim’s, he’s worked out for like the past five days or so and he’s kicking a** and I just want Rob to do what’s best for him and what makes him happy. And if that makes him happy, then we will all support him.”
A source previously revealed Kardashian is “ready to take control of his life again” and is getting back on the right track by going to the gym and eating better, which sources say is all for the sake of his two-year-old daughter Dream.
An insider shared: “Rob’s main priority has always been his daughter, Dream, and that’s the main reason he’s back in the gym. Rob has struggled with staying healthy, but since Dream was born, he’s realized how much more important it is for him to get back into the gym and eating healthy. Rob is now in a very good place and ready to take control of his life again when it comes to fitness and a healthy lifestyle.
“For years, the sisters and Kris have wanted Rob to find comfort in his body again, but quickly realized the more they pushed onto him, the more he took a step back. The family has allowed Rob time to process his own emotions regarding his health and wanting to put the best foot forward for [his daughter] Dream, and they’re extremely happy he’s decided to get back into the gym and eating healthier. The sisters and Kris have offered support as well as anything he needs. At the end of the day, everyone wants healthy and happy Rob back.”