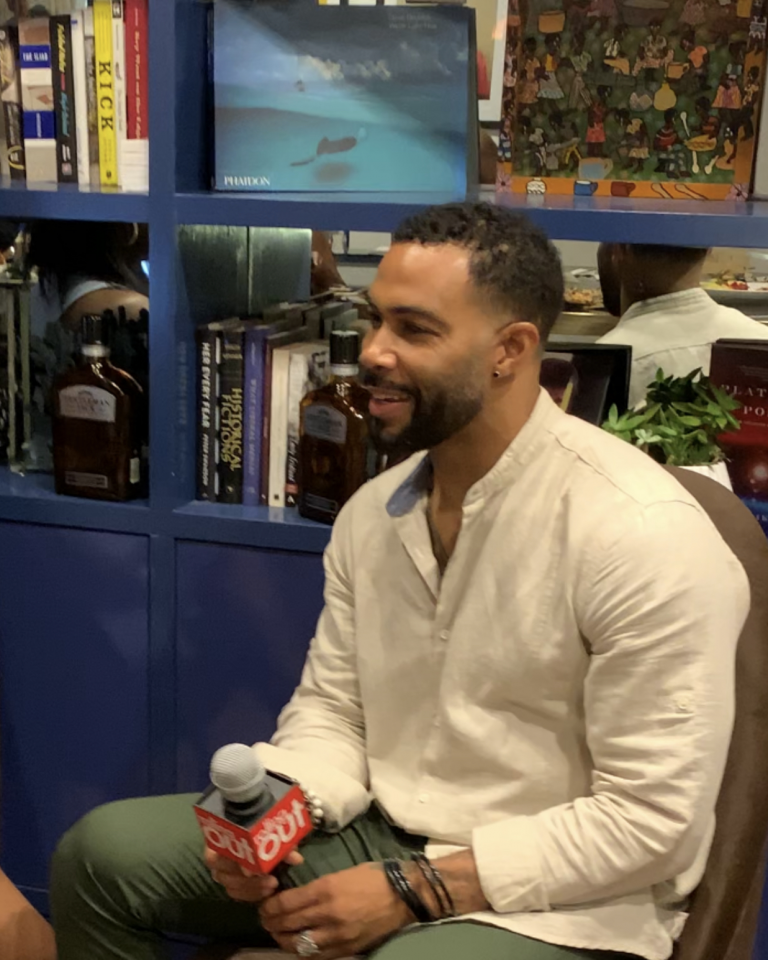 Award-winning actor, producer, and writer Omari Hardwick teamed up with Jack Daniel’s Gentleman Jack brand to pay it forward for African American filmmakers across the nation. Hardwick and Code Black Life have partnered to help Gentleman Jack-US advocate the importance of inspiring and developing more diverse voices in the film industry. For the third year, Hardwick helped to celebrate and support emerging Black filmmakers with Gentleman Jack’s “Real-to-Reel” contest. The contest is a national short film competition that showcases the creativity and talent of up-and-coming Black filmmakers. The annual contest is open to filmmakers 21+ who would like to submit an original short film online at GentlemanJackFilm.com. Participants get an opportunity to win $10K and have their film screened for an exclusive audience in Miami during the American Black Film Festival (ABFF).

We caught up with Hardwick during this year’s American Black Film Festival (ABFF) to talk about the contest, this year’s contest winner and about his partnership with Gentleman Jack.

This is the third year Gentleman Jack is back in partnership with ABFF with their “Real-to-Reel.” Tell us more about that.

With the title alone, one real is “R-E-A-L”, and the other one denotes that of which the movie business is about: reel. We want our stories to be able to be lived. When the actor takes the writers work and the producer’s work and the creators work, and then they bring it to the big screen or the small screen, they’re living it. Gentleman Jack stepped up to a different kind of plate. They decided they wanted to be at the forefront of aiding Black storytellers, not only in front of the camera, but, in my opinion, more importantly, behind the camera. And to allow for a space for our stories to be given to the world and lived out by actors.

For me, being somebody that got my profile to a place where it’s substantially built, it was like breathing air for me to give back in that way.  It felt second nature to be a part of someone else’s story, who looks like me. As opposed to coming into this business being a part of white Hollywood or Black Hollywood, which I’ve never relegated myself to either, I always thought I was a part of Hollywood and filmmaking.  So, people who look like me, I just wanted to give them a shot.  This is a way for me to say ‘hey, I see you. I see your dream. I see your story. You too can become powerful and potent.’ Most people that look like us are the first of us in our household. So, I wanted to be a person who could help these people be the first of who they are, or the second or the third. I always wanted to be someone who was at the forefront of letting Black people think we can rock in filmmaking. And I felt like Gentleman Jack did us a solid because they gave us an opportunity.

ABFF is the perfect platform to highlight Gentleman Jack’s Real-to-Real contest. How has your experience been thus far?

The macrocosm of why we’re here is the American Black Film Festival. The reason we’re all here this week is because of a big brother of mine, Jeff Friday’s festival, which is now legendary. It started out in Acapulco, Mexico, and saw the likes of a Halle Berry, Robert Townsend or a Sam Jackson, or a Denzel, and graduated to a whole other level. We are in a time and a space where our story is exciting and attractive now. There’s a gravitas to the story being told, and not necessarily always specified to the Black story, but is being told by Black filmmakers. The story from the perspective of the Black filmmaker is all of a sudden attractive.

Tell us more about Gentleman Jack’s Real-to-Real national competition. What is it and how can people find out more information?

You enter via the website, we take submissions during a portion of the year. You get in, and we choose a winner. There is a prize, and it’s 10K. You can take those winnings and you can do whatever it is you want to do with it. Our present winner, Rashad Frett, is currently working on creating a feature film out of the short that he did that won this year. [Films] can be of any genre. We’re open in terms of thriller, horror, etc. Obviously [Jordan] Peele has done a great job of allowing us to focus more on that genre. That was a genre we didn’t necessarily mess with, even as a fan base, we [usually] don’t rock with scary at that level. So, all the genre’s we invite. We just want you to tell your stories in a very, very different way. Be creative. Make it where it’s not the same old [storyline] that we know: one that we can predict and we know what the ending is. Let it be really different.

Rotimi exited ‘Power’ in a blaze of glory