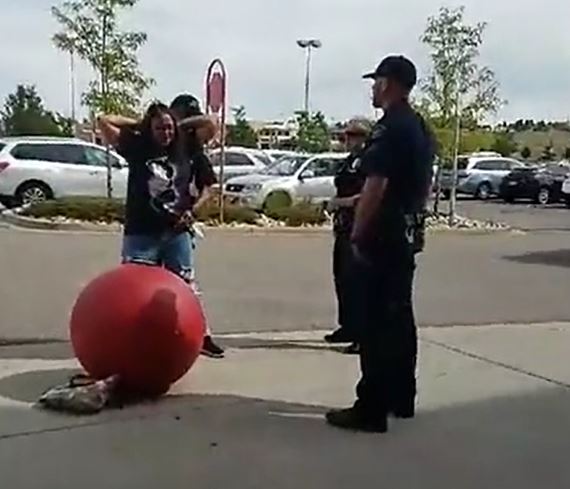 A pregnant Black woman believes that she was violated by police over an ordeal that began over a coupon.

Jazzmin Downs, 25, attempted to use a $1.50 coupon for shampoo at Target in Aurora, Colorado, according to News 9. However, the sales clerk told her that she could not use the coupon and Downs asked to speak with a manager. But instead of being allowed to speak with the store’s manager to resolve the situation, she was asked to leave the store and the police were called.

When Downs walked outside, she was approached by police officers (three male and one female) and began explaining what occurred. At some point during the conversation, one officer saw that her hands were in her pockets and he decided to pat her down. Downs began screaming and someone recorded the incident on a cell phone. While being searched, Downs told the police officers that she was pregnant by screaming, “I’m pregnant, stop squeezing my stomach!”

The video shows Downs’ hands being forced behind her back by a male officer who searched through her pockets. Police did not find any evidence or have cause to arrest Downs.

The video of the incident was uploaded to Facebook by Tiffany Goodloe and has since gone viral. After the police released her, she told them that she felt violated.

The Aurora Police Department is currently standing by the officers’ actions, but they say an investigation will take place.