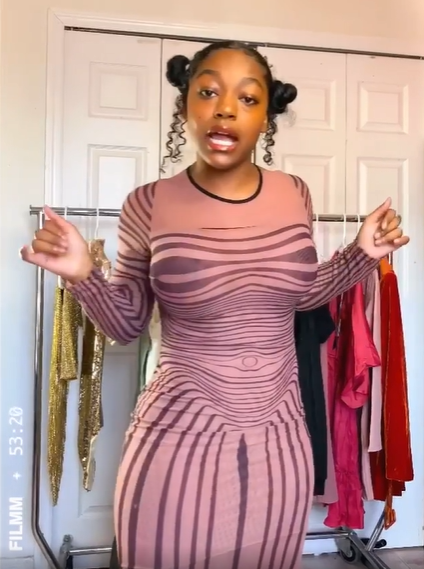 Azriel Clary, former live-in girlfriend of R. Kelly, may have managed to escape the emotional grips of a man many have called an outright monster, but it’s those trolls she still has to conquer.

Since moving out of Kelly’s luxurious highrise condo in Chicago, the aspiring singer and rapper has recreated her life through therapy sessions and good old fashioned family bonding. However, because she’s gone on record as saying she will publish a tell-all YouTube series (among other things) surrounding her years-long relationship with the disgraced R&B star, she has been pinpointed by some as a clout chaser, among other things.

Clary responded — as she’s made a habit of doing since building out her social media channels — with a freestyle that addresses those clout chasing claims.

In her most recent Instagram post, the Florida-born beauty spits with confidence while sporting a dress that hugs her curvy frame:

Everybody wanna hear my peace/They say I’m using clout,
They hate to see the baby eat/ It’s so crazy because I swear, I’m not trying to compete…
To all the women that be knocking me, you probably been hurt and never healed properly/
It’s gonna take more to get a reaction out of me

To all the n—– who say that I suck, probably the same six n—– beating b—— up/ Bringing a strong woman down because you can’t keep up.

Peep Clary’s freestyle flow in its entirety below:

I guess my aura speaks volumes even in defeat. 🌱 TAG @sheff_g @_sleepyhallow_ if you like it. go support & steam flows pt. 2 🥁