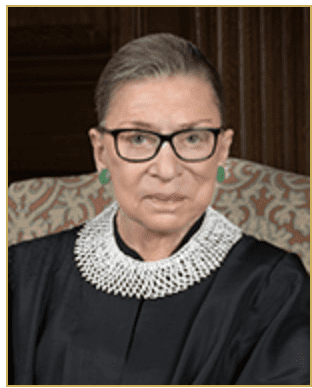 Well the importance of the upcoming election may have just notched up a bit with the passing of Supreme Court Justice Ruth Bader Ginsburg. Bader Ginsburg was 87 and passed from complications of metastatic pancreas cancer.  Since the president appoints and the Senate confirms Supreme Court justices, this vacancy will likely become the next political hot potato in the upcoming Nov 3 presidential election. Just 4 years ago Republicans said that Obama shouldn’t appoint a justice at the end of his term, yet they are already saying publicly that “this is different” and Trump should hurry up and appoint a new justice before this term ends.

Back in July when her cancer reappeared, Bader Ginsburg said “I have often said I would remain a member of the court as long as I can do the job full steam.”  In a statement released earlier today, Chief Justice John G. Roberts Jr. said “Our nation has lost a jurist of historic stature. We at the Supreme Court have lost a cherished colleague. Today we mourn, but with confidence that future generations will remember Ruth Bader Ginsburg as we knew her — a tireless and resolute champion of justice.” She had served on the court since being appointed by Bill Clinton in 1993 and was a leader for the liberal agenda in most rulings.

Please make your voice heard and vote on November 3rd. If you’re not registered, click here now and register. If you are registered, take 2 minutes to verify that you haven’t illegally been removed from the voter rolls. Click here.

Here’s her official bio on the Supreme Court web site:

Ruth Bader Ginsburg, Associate Justice,
was born in Brooklyn, New York, March 15, 1933. She married Martin D. Ginsburg in 1954, and has a daughter, Jane, and a son, James. She received her B.A. from Cornell University, attended Harvard Law School, and received her LL.B. from Columbia Law School. She served as a law clerk to the Honorable Edmund L. Palmieri, Judge of the United States District Court for the Southern District of New York, from 1959–1961. From 1961–1963, she was a research associate and then associate director of the Columbia Law School Project on International Procedure. She was a Professor of Law at Rutgers University School of Law from 1963–1972, and Columbia Law School from 1972–1980, and a fellow at the Center for Advanced Study in the Behavioral Sciences in Stanford, California from 1977–1978. In 1971, she was instrumental in launching the Women’s Rights Project of the American Civil Liberties Union, and served as the ACLU’s General Counsel from 1973–1980, and on the National Board of Directors from 1974–1980. She was appointed a Judge of the United States Court of Appeals for the District of Columbia Circuit in 1980. President Clinton nominated her as an Associate Justice of the Supreme Court, and she took her seat August 10, 1993.