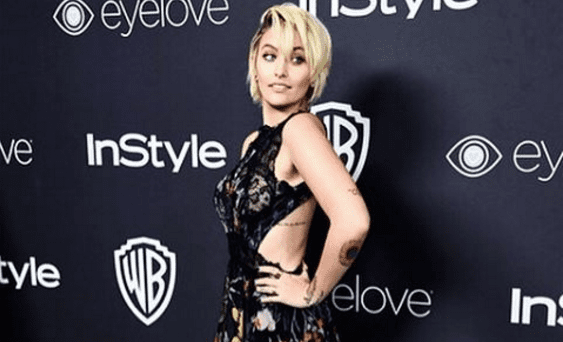 Paris Jackson debuts her new ink and it’s dedicated to her late father, Michael Jackson. “With every step I take, you lift my foot and guide me forward. Love you ?,” the 19-year-old wrote alongside a photo of the word “Apple Head” tattooed on her left foot. As fans may recall,Apple Head” was a nickname […] Simone Biles has acquired new ink. On Saturday, the 20-year-old Olympic gymnast took to social media where she revealed she recently got her first tattoo, with her pal Jake Miller. never too late to get the rings tatted ?? thanks for taking me neighbor ☺️ @jakemiller pic.twitter.com/n9wcNFQEAQ — Simone Biles (@Simone_Biles) March 18, 2017 Took […]

Rihanna proclaims love for Drake in a permanent way Rihanna is proclaiming her love for Drake in a big way. The pair shared a juicy kiss on stage — and not just any kiss, at the 2016 MTV Video Music Awards, just days after Drizzy displayed his admiration for the pop star with a rather large gesture. In honor of Ri Ri’s big win ahead […] Amber Rose certainly had a heartbreaking split from her Wiz Khalifa last year and although it seemed like the estranged couple might reconcile and reunite, Rose recently decided to move on with her new boyfriend, Machine Gun Kelly. And now she’s, once again, proving that she’s over Wiz by removing a tattoo of his face […]

Did Tyga ink Kylie Jenner’s name on his arm? When it comes to Tyga’s women, it’s clear there’s only one on his arm … in ink, that is. Although the YMCMB rapper’s body is covered in tattoos, there’s one in particular that’s getting attention. While taking pictures with fans, the “40 Mill” recording artist allegedly debuted a new tattoo, featuring his rumored boo, Kylie […] Jordin Sparks embraces pain with new piercing “American Idol” alum and resident good girl, Jordin Sparks, gives us a glimpse of her dark side with a new, edgy piercing. On Wedneday, Oct. 22, the “Battlefield” recording artist debuted a bull ring piercing when she posted the below photo, captioned “I’m about to be wiiiiiide awake on […]

It’s only been a month since Fantasia revealed her new boyfriend, Kendall Taylor, to the world. And although some have questioned her relationship with Taylor, it seems like her new beau is quite serious about his love for Fantasia. And thanks to a new tattoo of his, there are rumors circulating that the couple is married. Last […]

Have Nicki Minaj and her boyfriend split?

Mariah Carey has received a lot of hate and criticism over the past week over her choppy vocals on her “The Elusive Chanteuse Tour.” And though Carey and her husband, Nick Cannon, are in the midst of a high profile divorce, Cannon is still diligently serving as a doting soon to be ex-husband, he recently defended her […]

As a newly single man, we expect Nick Cannon to debut a new look any day now. In the meantime, check out the “America’s Got Talent” host’s signature style and seven fashion tips to steal from the jack of all trades below. – ruthie hawkins/@ruubabie

For weeks now, Nick Cannon and Mariah Carey have remained relatively tightlipped about their divorce, but all hopes of a reunion between the two have been slowly dying as the pair have both stopped wearing their wedding rings. Now Cannon has put another nail in the coffin of his marriage as a photo of the […]

Miley Cyrus takes a break from sticking her tongue down other people’s throats to get a new lip tattoo. Recently, the 21-year-old singer took to Instagram to show off her latest ink. Featured in the image is Cyrus showcasing her bottom lip, inked with an emoji of a kitty cat. “#sadkitty #f*ckyeahtulsa @waynewontpostpicsofnakedwomen @katyweaver #lovemoneyparty […]

Saturday morning, Rihanna ducked into her favorite tattoo shop, Bang Bang Tattoo in NYC, where the “Pour It Up” singer inked a large tribal cross on the inside of her wrist. The above clip, posted by Bang Bang himself, documents a bit of the early a.m. work he did on the Bajan pop princess. Sources […]

When it comes to celebrities and their fans, we’ve seen some weird events unfold. And while getting the face of your favorite celebrity inked permanently onto your body may sound a bit crazy, that’s just what this super fan did. Recently, Miami Heat baller Lebron James posted a photo of a fan who tattooed the […]

Miami Heat and their tattoos

When the Miami Heat take the court, there is one player who stands out from the rest -Chris “Birdman” Andersen. When Andersen is on the court, the entire arena is filled with color. With tattoos from his neck and completely covering both his arms, he is definitely a work of art. However, Miami Heat’s six-foot-eleven, […]

The 10 worst celebrity tattoos of all time

When body art goes bad, the following celebrities take the cake! Check out the 10 worst celebrity tattoos of all time here. – ruthie hawkins