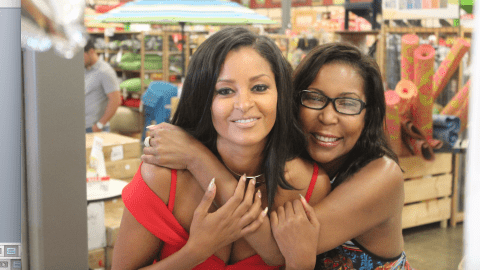 For Claudia Jordan launching her new wine, Just Peachy, in Atlanta was such a no brainer. When thinking of a name, she wanted it to reflect the taste she was looking for in her wine and it was important to create something that most women would love. Enjoying her experience living in Atlanta and sipping […] Now that former “The Real Housewives of Atlanta” star Claudia Jordan has been ousted from co-hosting Hot 107.9’s “The Rickey Smiley Morning Show,” rap star Da Brat has become her replacement. The 41-year-old veteran artist’s new position comes after the announcement just a few days ago that Jordan would be leaving the syndicated radio show. […]

Ebony Steele on beating cancer and living a healthy life

As a breast cancer survivor, popular media personality Ebony Steele knows how to make health a priority and the true importance of having a solid support system. Last month, Steele utilized her platform to launch a campaign bringing awareness to a cause close to her heart: breast cancer. Throughout the past several weeks, Steele has released […]

Breast Cancer is a diagnosis that no woman wants but it happens every day. The women who are hit with this handle their crisis in different ways; some give up and some go on. But the Susan G. Komen Foundation encourages the women to go on. Two such women are Ebony Steele from the Rickey […]

The stars were aligned at celebrity make-up artist Jeremy Dell’s “Beat To Capacity” industry celebration. Cynthia Bailey, Ebony Steele and Miss Lawrence Washington stormed the red carpet praising Dell for his contribution to their awesome looks that have reached a nation through “The Real Housewives of Atlanta.” Held at Atlanta’s signature industry spot, Bar One, models, publishers, business owners, […]

Atlanta’s top stars and more will gather at the historic Georgia Freight Depot for the Prime Time Black & Red Gala Celebration 2013 hosted by Pro Football Hall of Famer Deion “Prime Time” Sanders. Taking place during the 4th Annual Prime Time Youth Sports Weekend, Sanders has invited all of his celebrity friends and NFL/MLB counterparts to join him in a celebration […]

Last night radio and television personality Rashan Ali celebrated the release of her first children’s book,“Piper Sky’s Pink Popsicle Shoes,” at Frank Ski’s Restaurant and Lounge in Atlanta where she was surrounded by friends, family and some of Atlanta’s influencers. The book series was written for children ages four through nine and follows Piper Sky […]

Nene and Greg Leakes throw Christmas bash! Who wore what?

At reality diva Nene and Greg Leakes first-ever Christmas Bash in Atlanta, the stars shined all night. Nene and Greg hit the scene wearing some fashion designer looks and we got the details on what many local celebrities in attendance wore to the most talked about event of the year! Click below to see who […]

On Nov. 28, rolling out attended the Who’s Who in Black Atlanta event where more than one thousand of Atlanta’s best and brightest gathered to pay tribute to the city’s leading professionals for their contributions to the business community. We had a chance to meet a few amazing attendees and honorees who were kind enough […]

Congratulations to the Top 25 Women of Atlanta Awards honorees who were recognized on Friday, Oct. 26, 2012 at the Ballroom at TWELVE hotel at Atlantic Station. The esteemed recipients below are entrepreneurs, corporate executives and civic and cultural trailblazers: Alisha Thomas Morgan, House of Representatives, Georgia Anne Talton, agent/owner, American Family Insurance Camille Russell […]

On Friday, Oct. 26, 2012 Atlantic Station’s Ballroom at TWELVE hotel in Atlanta was filled with honorees, family and friends of women who were being recognized for their business, civic and community efforts at the Top 25 Women of Atlanta Awards, a program of the Steed Society Inc. and rolling out. It was an evening of […]

On Tuesday, Oct. 22, Ebony Steele hosted the third annual “Eye Candy: Bare Chest for Breast Cancer” Runway Show at 595 North in Midtown Atlanta.  Handsome men strutted their stuff on the catwalk, as attendees enjoyed treats from the sponsors, like Lamik Beauty, Spa Dental and Cake Cafe.  The crowd was filled with some of Atlanta’s most important […]

Ebony Steele explains why she and Rickey Smiley never dated

Unless you’ve been living under a rock and have completely ignored all social media, you know that “Love & Hip Hop Atlanta” star Joseline Hernandez has been carrying on a scandalous affair with her already-involved co-star and producer, Stevie J. But even with the public airing of her love triangle with Stevie and his longtime […]

Eight professional women came together at the Female Success Factor (FSF) seminar held at the Atlanta History Center on Saturday, March 26, 2011. The theme of the event, which was held in celebration of National Women’s History month, was “Celebrating Successful Women Living Their Dreams.” Saturday’s event showcased leaders in the music, marketing, legal and […]